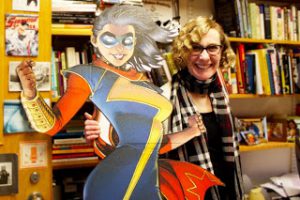 I’ve been a comics fangirl since I was a kid—”Betty and Veronica” to my big brother’s “Spider-Man” comics.

I teach English at Goshen College, a small but mighty liberal arts school in the “Michiana” area, where my courses range from critical theory and gender studies to composition and creative writing.

I first brought comics into my professional life when I created and taught a course called The Graphic Novel in 2008. I started “Commons Comics” in 2013 to stay current in the field. It was hosted first by my college, then picked up by “The Elkhart Truth,” a local newspaper, before I moved it to my own page.

I just published my first solo book, “Bodies and Boundaries in Graphic Fiction: Reading Female and Nonbinary Characters,” on Routledge (UK). It’s part of the series Routledge Research in Gender, Sexuality, and Comics Studies, edited by Frederik Byrn Kohlert. Hardcover and ebook came out in July 2022: you can check it out here.  Look for the (more affordable!) paperback in early 2024.

My first book is an essay collection co-edited with comics and religion scholar Hussein Rashid about Kamala Khan, the new Ms. Marvel. “Ms. Marvel’s America” was released by the University Press of Mississippi in March 2020.

I also published an essay in “Lessons Drawn,” a collection of writing about teaching comics edited by David Seelow, with an introduction by James Sturm.

I also write poetry, memoir, fiction, and screenplay. Stay tuned for a new poem, just accepted at The Shore, which will be included in Issue Fifteen.