Food and cooking always figure prominently within comics. Even Scott McCloud’s classic comic about comics—his theoretical work “Understanding Comics”—uses a cooking scene to illustrate the powers unique to the genre: 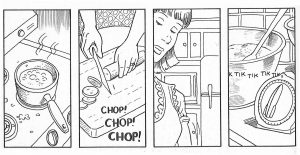 As the smells and sounds of cooking waft between the frames, it doesn’t take more than a few visuals to immerse you into Mom’s kitchen—just a couple of squiggly lines from the soup pot evoke not only hunger, but also warmth, and perhaps a sense of comfort.

Advertisers are certainly aware of the power of images to trigger our senses of taste and smell: a single photo of a burger, a cookie, can send someone on a midnight run to the store, and a slow-motion ad of someone dipping a fork into a piece of chocolate cake, and slowly, slowly moving it to her mouth . . . OK, yes, just using words to describe the power of such an image certainly works pretty well, because I could really use some cake right now.

But over-the-top images like that emphasize what you’re missing, what you need, which is why advertisers love them: you’ll spend money to fill that hole. A comic like Lucy Knisley’s “Relish,” however, encourages a relationship with food, rather than simply manipulating or overwhelming you with your basest impulses. Comics are suggestive yet continuous—the frames carry the memory of tastes, smells and warmth, yet only gesture rather than try to recreate.

“Relish” is a comics memoir about food and youth that strikes the perfect balance between gesture and immersion. Knisley’s introductory chapter sets the scene for the whole collection: 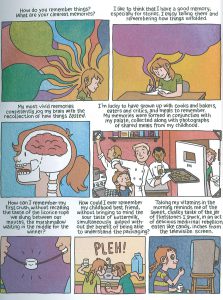 “Relish” is about place and time and story, not just about that rumble in your belly. Knisley grew up with a chef and a food snob for parents, so no chapter of her life exists without a food-related association. Even the story of her own gestation is spun in the context of her mother’s main job during her pregnancy: managing the cheese section of a gourmet food store. 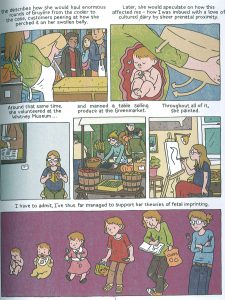 Food focuses otherwise run-of-the mill chapters about growing up, college, travel, family, and friendship. Knisley’s teenage rebel phase, for example, chronicles how she ate junk food in front of her horrified foodie parents. And another fairly common childhood story, the trauma of a city kid transplanted to the country, in Knisley’s hands becomes an explanation of her love for foie gras, the gourmet delicacy made by force-feeding geese: 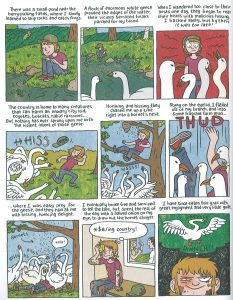 Bonus: you get a cookbook with your stories. Each chapter closes with a thematically appropriate recipe, or in one case, a visual handbook of sorts for navigating a gourmet cheese shop: 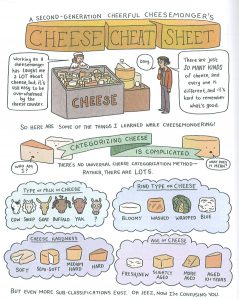 Those existential chunks of cheese at the ends of the green banner above are a good example of the balance between humor and reflection that really carries these stories. A somewhat disorienting trip to Japan becomes, via Knisley’s pen and ink, a simple yet astute catalog of the differences between Western and Eastern cultures: 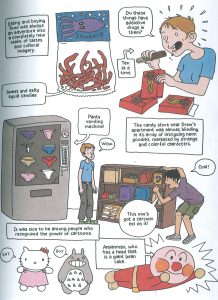 A couple of reviewers have criticized “Relish” for being light on analysis and reflection, but I prefer the way she shows rather than tells, as the creative writing adage goes. Knisley isn’t going for heavy duty—and she shouldn’t. She’s still in her 20s and will have plenty of time for more weighty endeavors. In the meantime, this is the perfect book to head into fall with. Curl up with some hot chocolate and a batch of perfect cookies from her playfully diagrammed recipe, and you’ll barely notice that lost hour of light when the time changes in November.

Stay tuned for my next post, when I’ll review another childhood memoir, Gilbert Hernandez’s fictionalized but admittedly autobiographical “Marble Season.” This simple yet poignant story of a Latino child in 1960s California will take us into the past, as well as into a discussion of the power of comics in black and white.

Thanks as always to Better World Books in Goshen, Indiana, and see you in another two weeks.