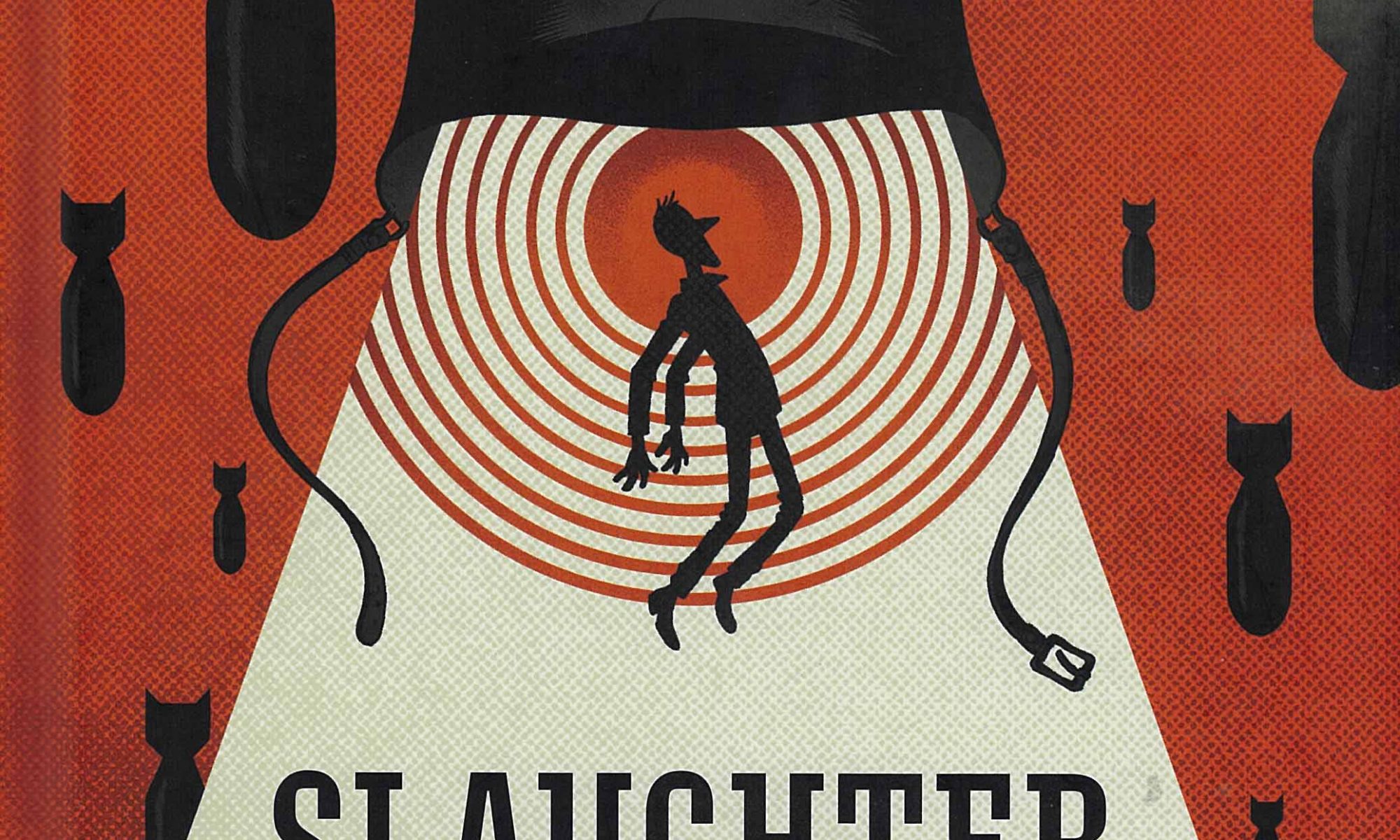 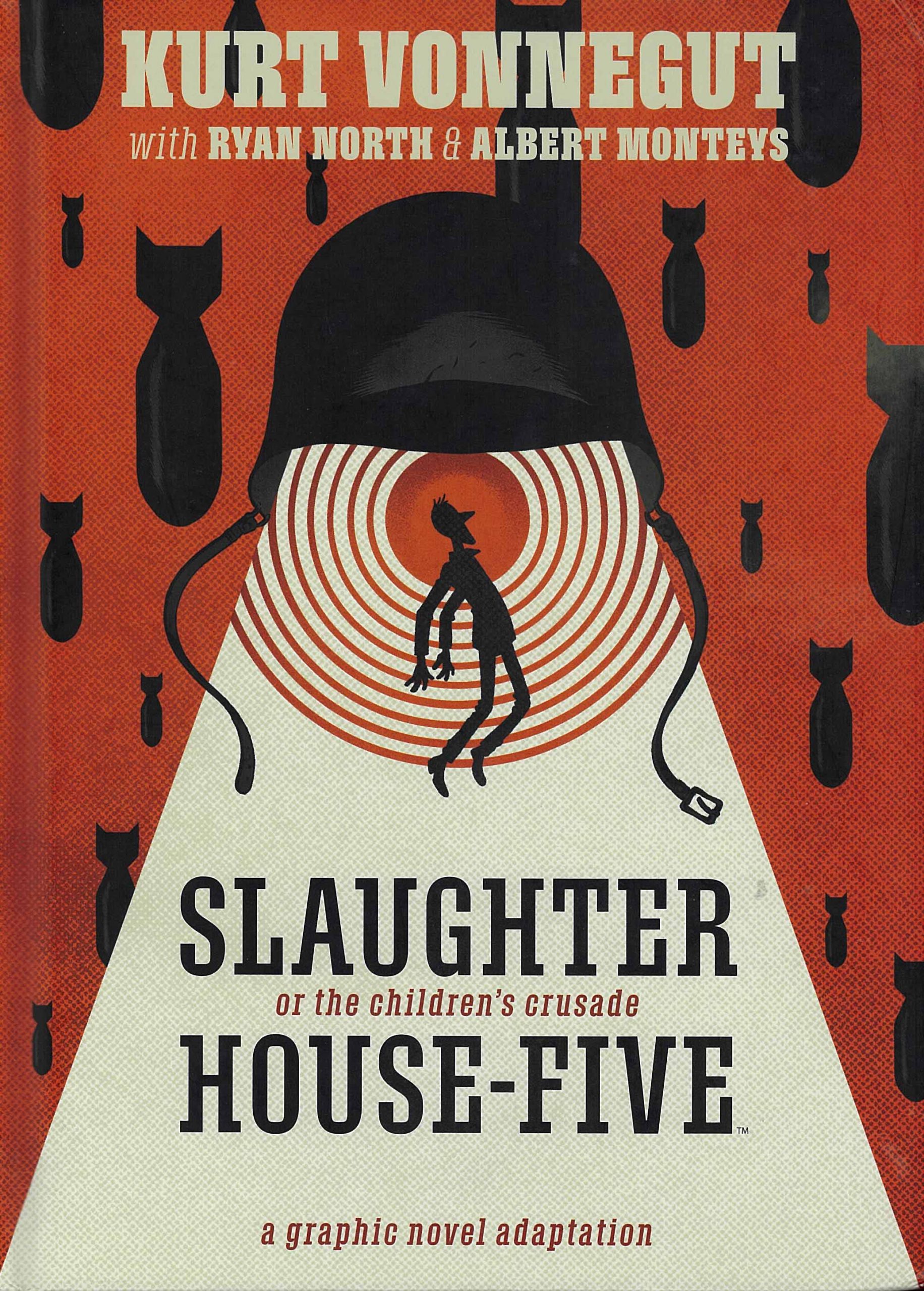 “No way, this is crazy,” was the initial reaction of Barcelona-based comics artist Albert Monteys when an editor from Archaia offered him a gig reinterpreting Kurt Vonnegut’s classic 1969 novel “Slaughterhouse-Five.” As writer Ryan North recently told “Black Nerd Problems,” his response was similar. “You definitely don’t want to be the one who messes up Vonnegut, you know?”

“Slaughterhouse-Five” is so singular and beloved, who wouldn’t be skeptical of a comics adaptation? I love and believe in this format—and I love and believe in North’s work so far, and what I’ve been learning about the work of Monteys—but much like these creators, my first reaction when I heard about this book was raised eyebrows. Adaptations are often simply a way for everyone to make a quick buck out of a recognizable title. I’m not alone in having been burned by rushed and ill-thought-out adaptations, which get fans excited, then fail to move much beyond the status of mere illustrated book—and often poorly illustrated book at that.

Yet once Monteys saw the script that North had drafted, he changed his mind. North’s remix and reinterpretation of Vonnegut’s original is its own brilliant thing. The book also serves as a memorial to Vonnegut himself, who died in 2007. It’s a tricky business respecting longtime fans and newcomers alike, so North and Monteys address that tension immediately, fleshing out a famous line drawing from the original novel, and harnessing it to serve as a moment of silence for its creator: 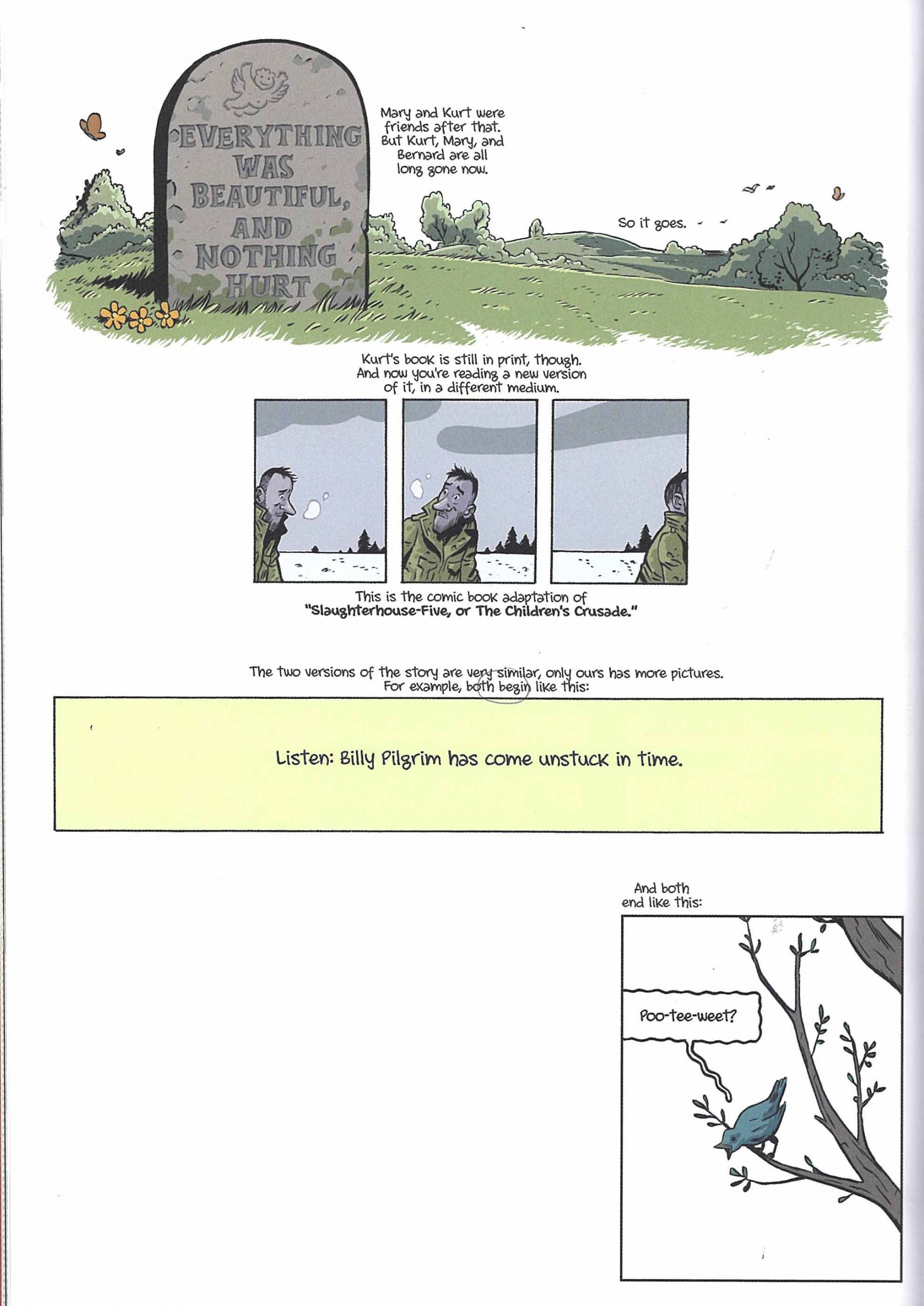 Part of North’s success with the script is that he himself is a superfan, so much so that he vividly recalls his first read of “Slaughterhouse-Five.” As he told a “Comics Beat” interviewer, “I still remember the moment, there parked in my car, putting the book down to look out at the night and the empty lot. The book demanded it, demanded that I take this moment to let it sink in.  I’ve never had that before or since—normally I just tear through things.”

If you haven’t read the original, please do. It’s a quick but gorgeous and mind-blowing read, overflowing with compassion for flawed humanity, as well as incisive critique of the way that thoughtless humans too often put their fellow beings in crappy and dangerous situations to protect their own interests. Vonnegut witnessed humans at their best and worst as a prisoner of war in Dresden, Germany, at the end of World War Two, when the city was bombed. The main character of “Slaughterhouse-Five,” Billy Pilgrim, witnesses the aftermath of the bombing as well.

In the original novel, Pilgrim and Vonnegut as narrator weave in and out of each other as Pilgrim survives the war (like Vonnegut) and becomes an optometrist (unlike Vonnegut), then gets abducted by aliens from a planet named Tralfamadore (definitely unlike Vonnegut—at least in a literal sense). Pilgrim becomes “unstuck in time” by the Tralfamadorians, and once they allow him to see how he exists simultaneously at all stages of his life, he becomes powerless to stop himself jumping unexpectedly between past and future, often at exceedingly inopportune moments. For a quiet Indiana youth like Vonnegut, better suited to be a writer than a soldier, random, sudden time travel serves as a metaphor for the helplessness and horror of war and its psychological aftermath.

Ryan North might seem an odd choice to adapt such a vaunted U.S. classic. First, he’s Canadian. Second, he sports one of the silliest-looking career arcs in comics:

Yet not only is North, like Vonnegut, a master at pop-cultural sleight of hand, his balance of humor and brilliance matches Vonnegut’s, then translates it in ways that only comics can. Witness this scene where Pilgrim explains his role as a Tralfamadorian zoo exhibit: 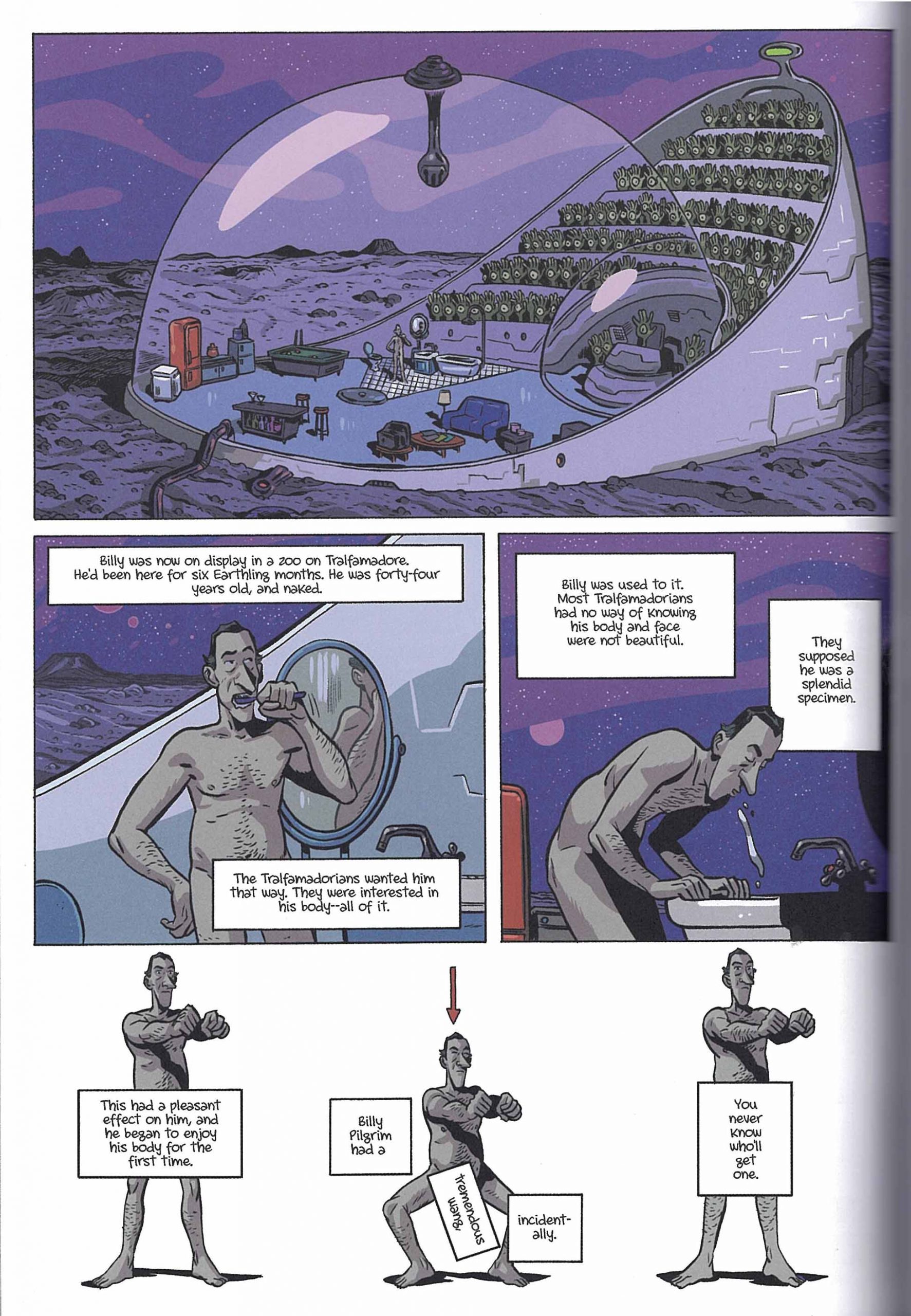 Comics as a format has other advantages in conveying Vonnegut’s story: Monteys can instantly represent the time travel shifts by changing clothes and settings, without North or Vonnegut having to say a thing. Purple-toned long, thin panels that look like microscope slides instantly clue the reader into the story’s time skips: 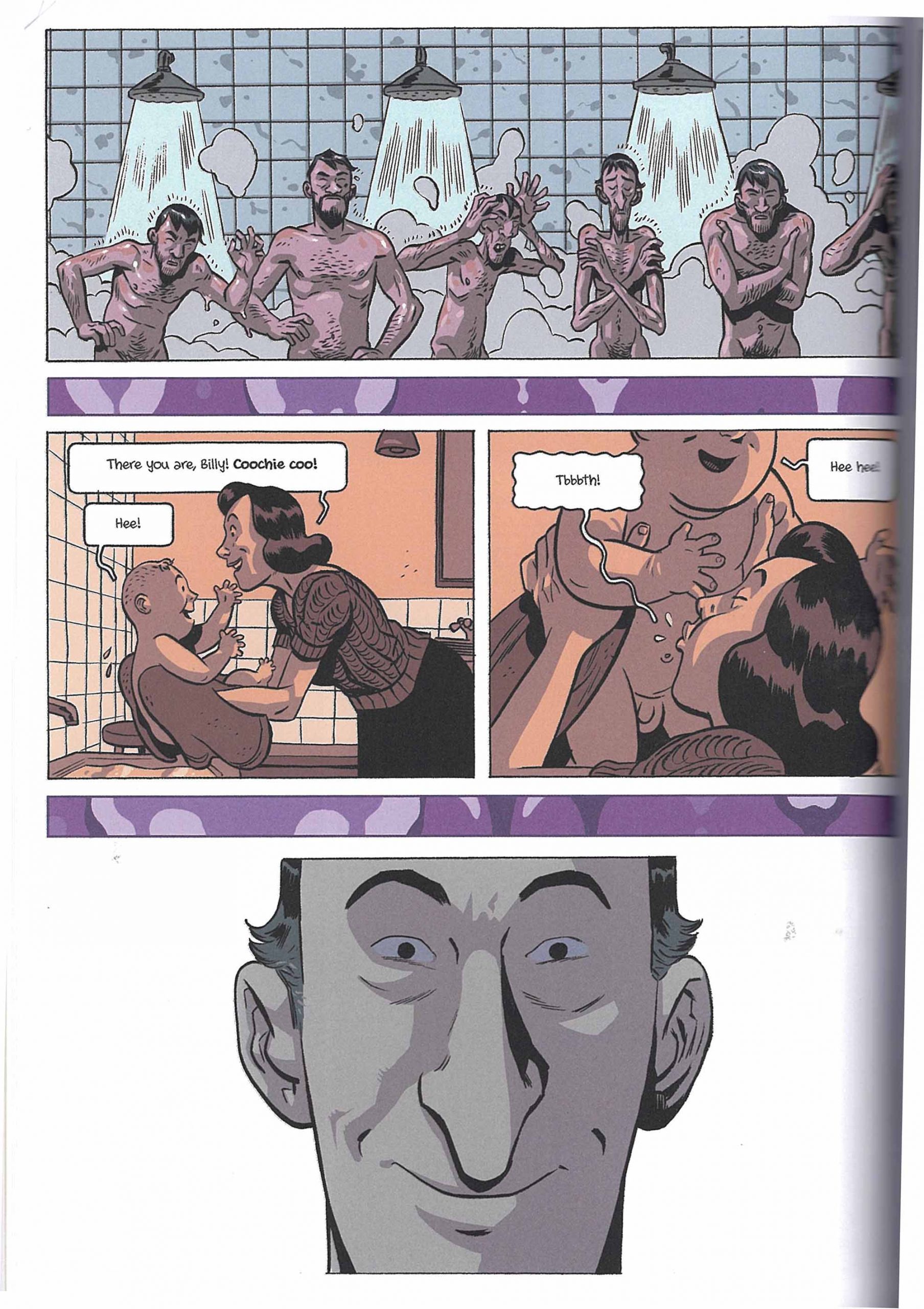 Some moments in North and Monteys’ adaptation even convey Vonnegut’s more ineffable ideas better than Vonnegut could. Here, for instance, Monteys illustrates a Tralfamadorian book. Vonnegut explains in the original that Tralfamadorians read their books all at once, and describes the content as “the depth of many marvelous moments seen together all at one time”:

I’ve always loved the concept of such a book, but I’ve never been able to picture what it would be like. I still can’t, but thanks to Monteys, I believe I’m a bit closer—and it’s beautiful.

This isn’t North’s first adaptation. He has translated two of Shakespeare’s plays into Choose-Your-Own-Adventure-style books, the first of which (“To Be or Not to Be”) became one of the most successful Kickstarter projects of all time. (His agent loved the book, but assured him that publishers would reject it out of hand.)

When asked why Vonnegut’s most acclaimed novel remains relevant today, North told the “Daily Vonnegut,” “Like all great art, it keeps speaking to you—and saying new things—no matter where you are in your life.  It’s a truly beautiful book.” If this adaptation has any flaw, it’s that it’s too beautiful. As Vonnegut explained directly to his editor in the early pages of the original novel, “It is so short and jumbled and jangled, Sam, because there is nothing intelligent to say about a massacre” like the bombing of Dresden. Over fifty years after the publication of “Slaughterhouse-Five,” this new adaptation places Vonnegut even more firmly on the same plane as Shakespeare as a key literary—and now visual—interpreter of human culture in all its complexity, both gorgeous and hideous.

2 Replies to ““Slaughterhouse-Five, or the Children’s Crusade: A Graphic Novel Adaptation.””