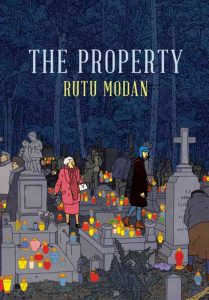 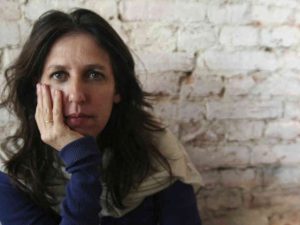 Last post I reviewed “The Great War,” by comics journalism pioneer Joe Sacco. Turns out that Sacco, most famous for “Palestine,” his first-person exploration of the history of the West Bank and Gaza Strip, interviewed this week’s author, Rutu Modan, back in 2008. Modan, well-known in her home country of Israel and rapidly gaining broader recognition, had just released her Eisner Award-winning book “Exit Wounds.”

As might be expected, Sacco and Modan discussed the Israeli-Palestinian conflict, Modan lamenting that “it is difficult for [Israelis] to stop seeing ourselves as the innocent victims, a role that we love so much and are such experts at being. . . . We would have to see that we have responsibility, and then we would feel that we should—God forbid—do something about it! No, we much prefer to go and have coffee with friends, or do some comics.”

So a reader new to Modan’s work might expect a bit of a polemic from “The Property,” a story about a young Israeli woman named Mica, who travels to Poland with her grandmother, Regina, to recover family property lost in World War II. Right from the start, Modan jumps into a tooth-gritting scene and setting, but not in the epic way you might be imagining. Here are Mica and Regina at airport security:

Grandmother Regina refuses to relinquish the bottle of water she just bought, while granddaughter Mica vacillates between wanting to defend her grandmother and wanting to slink off in embarrassment.

Modan is also quick to show these two characters’ complexity: we feel sorry for Mica as Regina digs in her heels, but Mica loses our trust when she takes underhanded revenge on someone in line who was particularly mean. Mica may be our heroine, but she’s no angel, and neither is her grandmother—which is precisely what makes us want to read more.

This is the first of many scenes that I would hate to spoil for you: the plot of this book is so powerfully and intricately mapped, I will do my best to leave you as engaged as I was at every page turn. But if you haven’t read mystery or suspense in comics form before, prepare yourself for a treat: visual cues work differently than the word-based cues in novels, and unlike in films, readers can linger, examine an image, and flip back and forth to piece together details from scenes such as these: 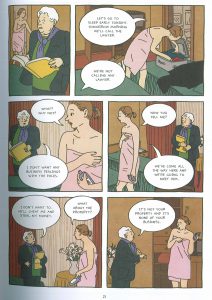 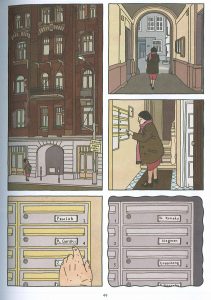 What’s in that yellow phone book that makes Regina snap at Mica when she tries to help make plans—the reason Mica was invited to come to Poland in the first place? Why does Regina sneak off on her own to this apartment building, and what’s the significance of the names on the buzzers? Similarly, Modan uses visual intrigue when Mica first meets Tomasz, a Polish man with whom she becomes romantically involved: 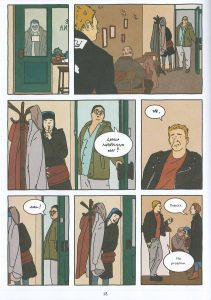 Tomasz becomes a hero when he rescues Mica from her pushy relative, but Modan always draws Tomasz’s face with heavy eyebrows that convey a bit of ambivalence. We’re not always sure we can trust Tomasz, and neither is Mica.

The word bubbles on the above page represent another narrative trick unique to comics: their ability to represent characters speaking multiple languages. Readers learn on page one that capitalized text represents Hebrew, and later, when the characters arrive in Poland, a second footnote marks italicized lettering as Polish—but only when Mica, the only main character who can’t speak Polish, is absent from the scene. When Mica is in a scene with Polish-speaking characters, these techniques expertly convey the discomfort and anxiety of the traveler unfamiliar with the language of the host country. To compound that discomfort, Mica hears her own grandmother speaking a language she can’t understand—with Mica’s new love interest, no less: 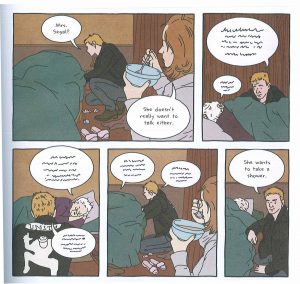 The above page represents a number of this book’s other strengths: subtle reader cues like the back of Tomasz’s jacket, and rich, enveloping color schemes—Modan has said that she planned out a particular palette for each location. Innovative framing and time progression are two other ways Modan employs the medium of comics to its full effect. On the first page below, Regina and an old Polish friend view images from a vintage “Fotoplastikon,” a giant viewfinder of sorts, and on the second page, we see her remembering Warsaw as it was before she left, on the eve of World War II. 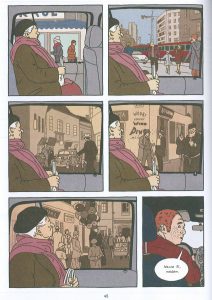 My favorite example of Modan playing with the storyline in a way that only comics can is in the frames below. Not only does Modan run two conversations at once, but the word bubbles cover up background action that the woman in the cast should be paying attention to. Readers see a few frames like this, 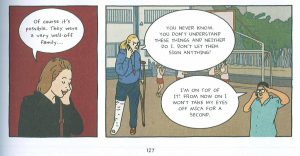 which later shift to this:

Such techniques are smart, fun, and maintain energy and momentum in the story. They’re not necessarily brand new, but Modan has come up with new ways to employ them. What I’d really never seen in a comic before, however, was a list of actors in the back of the book. As Modan explains in a recent interview in “The Comics Journal,” she hired real actors to bring her storyboard drafts to life. Not only did she photograph the actors in character, to use when she drew up the final drafts, she also used them to try out jokes and to improvise new dialogue and scenes. (Read the rest of the interview at http://www.tcj.com/rutu-modan/ .) 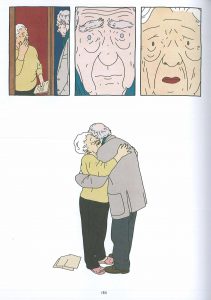 Don’t get the impression, however, that these tricks and techniques distract from the history and depth. Just because Modan refuses polemic doesn’t mean that she doesn’t make a point—she just engages and challenges her readers gently, gracefully and artfully.

The cover of my next review might look like I’m taking complete U-turn, but much like “The Property,” Ed Piskor’s “Hip Hop Family Tree” also aims for a unique way to engage its readers in history—this time, the early history of hip hop: 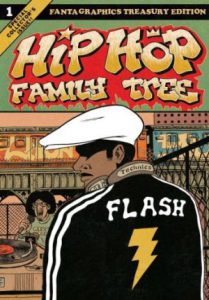 Thanks again to Better World Books in Goshen, Indiana for keeping Goshen stocked with too many great comics to read, and see you in another two weeks.