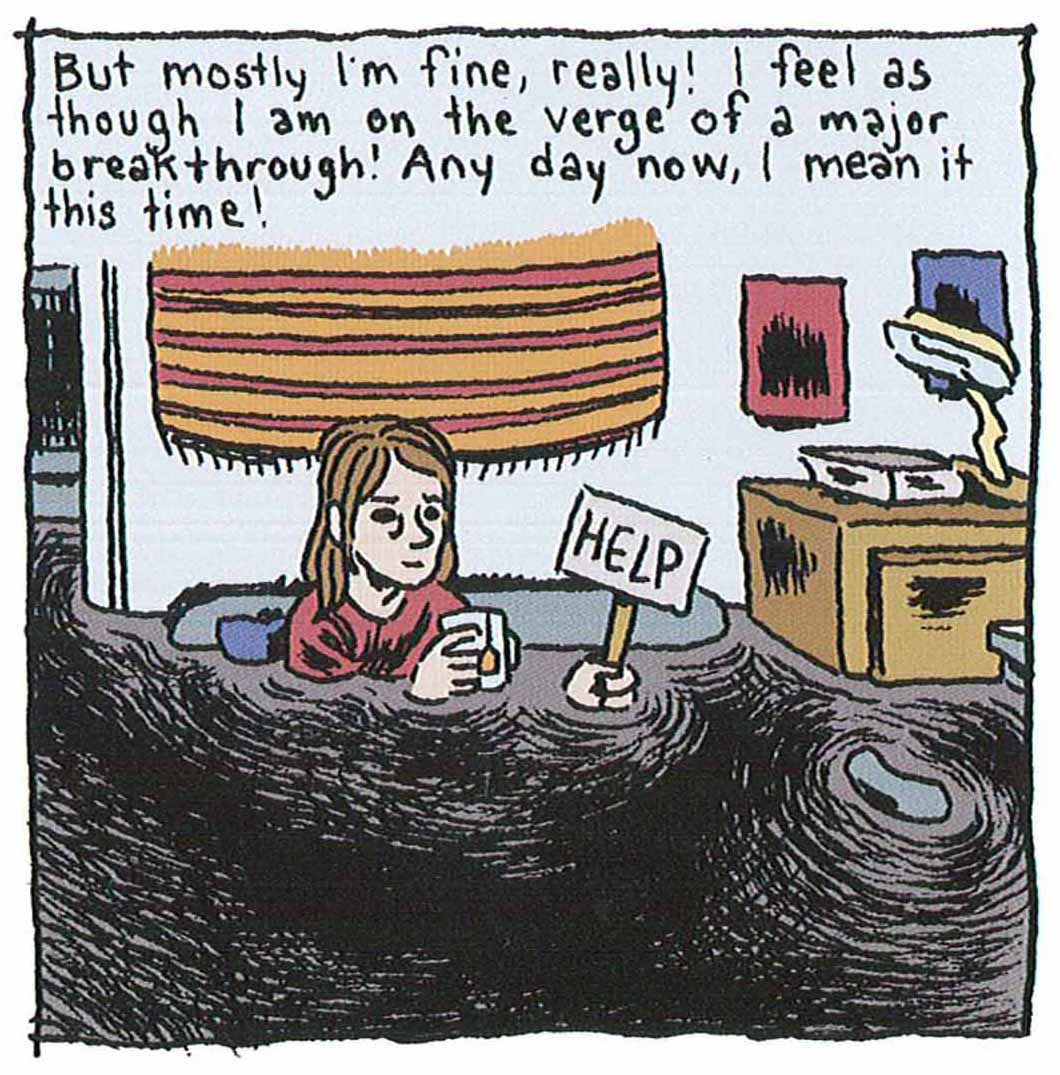 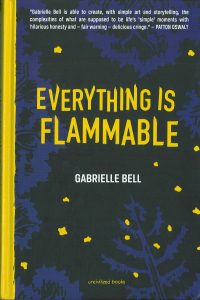 It’s hard at first to put your finger on why the rambling, fragmentary work of Gabrielle Bell adds up to such a powerful whole. Her first full-length book, the new memoir Everything Is Flammable, drifts from her anxiety to her neighbors to her obsession with her garden. But the method to her accumulated mental wanderings becomes clearer and clearer as the book unfolds, and the sum total is well worth the wait.

Which isn’t to say that you have to wait long at all to appreciate Bell’s mastery of the form. The book begins with the one-page, six-panel vignette, “I’m Doing Fine.” As with any autobiographical work, there wouldn’t be much of a story to tell if that statement were true. Witness her closing frame: 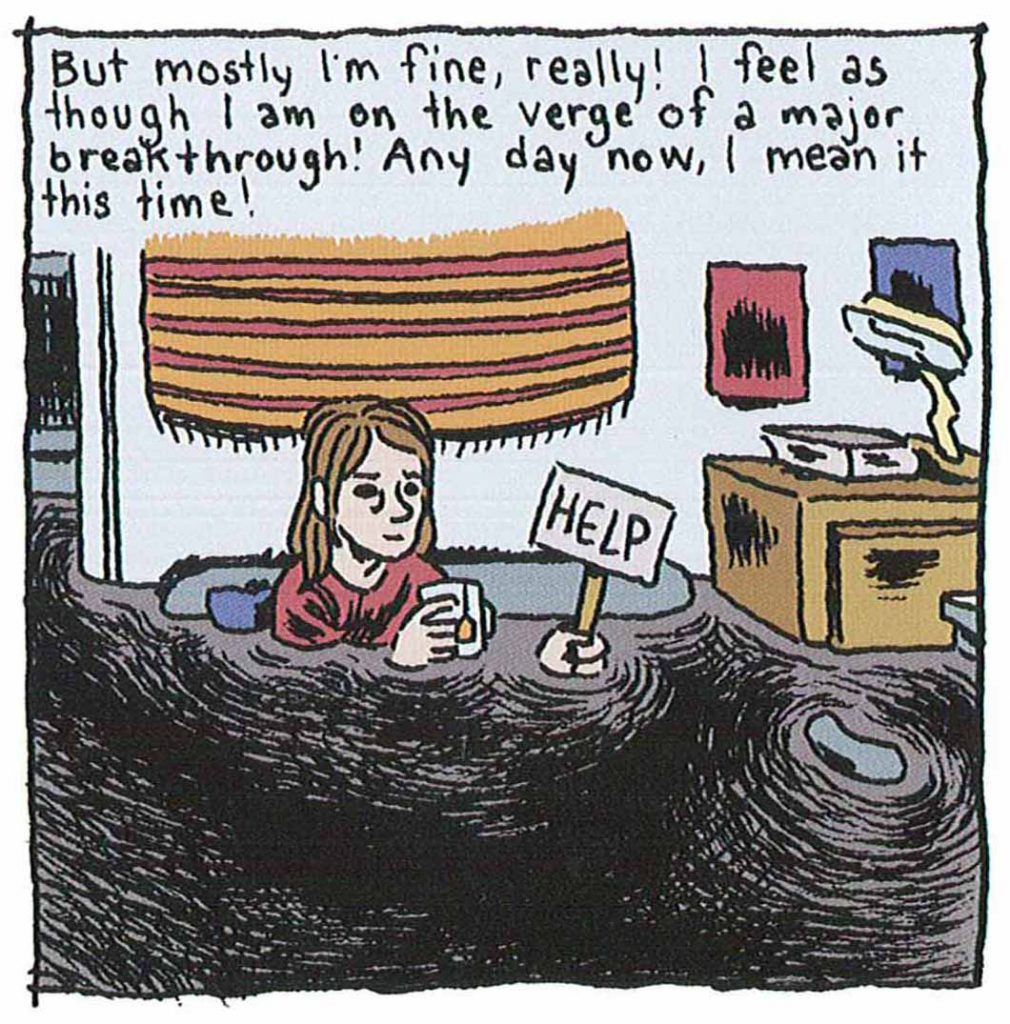 This panel is a textbook illustration of what comics do best: rather than simply illustrating the words, Bell mines the tension between word and image. The overexcited punctuation of the narration does its best to stay perky, while the picture tells the real story.

Bell is always willing to take her drawings to a level of absurdity that the words only hint at, which keeps her anxiety from weighing the narrative down, as in this full-page example, “Impediments”: 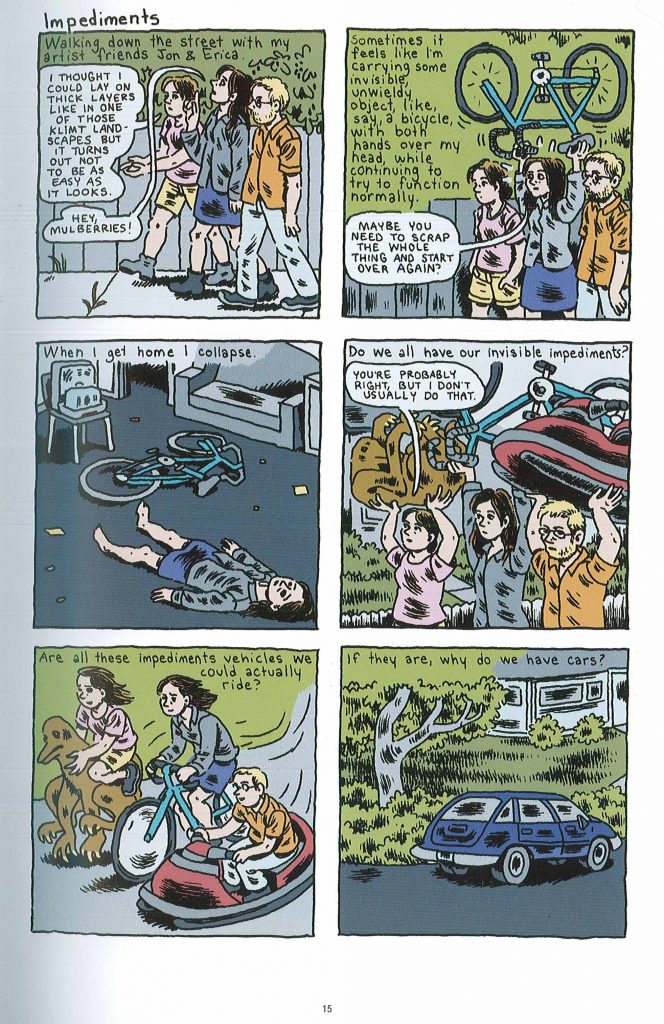 Many reviews of this beautiful and exquisitely human book focus on its complicated representation of the mother-daughter relationship. The loose plot starts with her mom’s house burning down on the other side of the country. Her mother is okay, but unsure what to do next. Worried, but questioning whether her presence will help or hurt, Bell decides to make her way west to see what she can do. As Bell and her mother negotiate the perils of buying a new house on a tight budget, the story spirals beyond their relationship and into a narrative about safety, anxiety, and the ways we all try to hold our lives together.

The vignette “Ghost Cats” is perhaps the best illustration of Bell’s acute awareness of the volatility of the world, and how quickly disaster can strike. After forty-odd pages of witnessing Bell’s often debilitating anxiety, this story also provides for the reader, with little drama, a flash explanation from her childhood of one possible source: a stepfather with an unpredictable temper, invited into the house by a mother either unable to protect her and her brother, or unaware that they need protection.

One day the stepfather brings home a new pet, a special breed of cat. The family dog, probably trying to play, bites right into the cat and kills it. Bell, still quite young, and unpracticed in the art of adult grief, knows that she’s supposed to commiserate about the cat’s death, but the best that she can muster is, “Oh well.” What happens next is swift and shocking:

The violence is over almost immediately, and the next scene shows the stepfather in a more positive light, helping rescue some kittens stuck under the floorboards. All of the threats in this book—sometimes real, sometimes imagined—come and go with surprising speed. Yet Bell’s also an expert at playfully defusing her fears, such as her fear of bears, here pictured more like furry, protective sentinels than dangerous roving beasts: 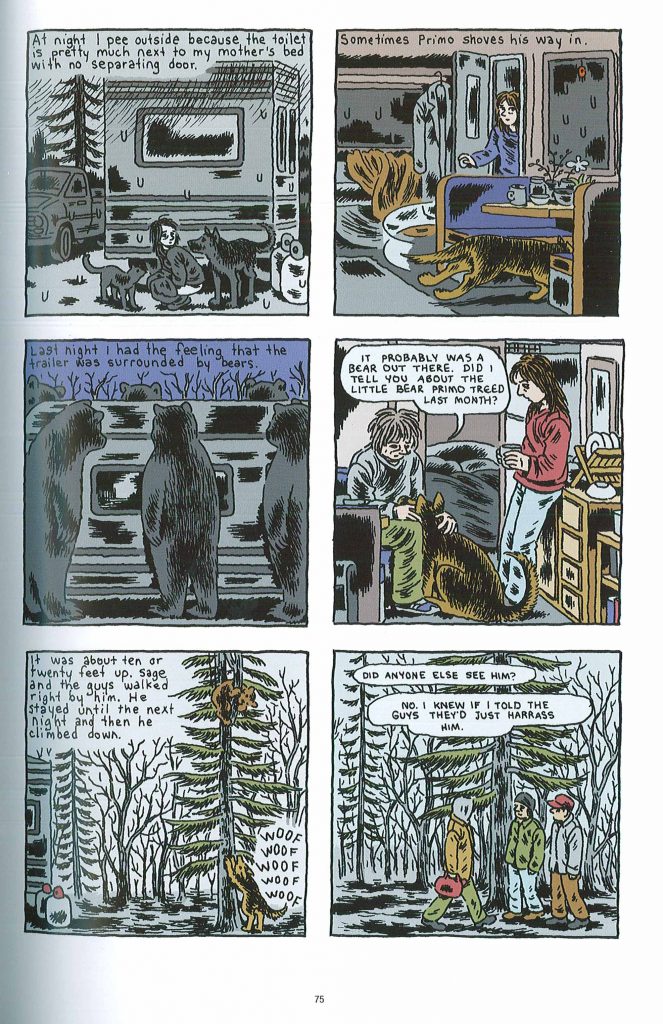 Everything Is Flammable is a story about building a life, but it’s also about buildings and other structures in society that seem capable of protecting us but can’t. “There’s an American sense that you have this right to this certain kind of safety and happiness,” Bell told the LA Review of Books in a 2016 interview, “and it’s—I don’t think that we do. I mean, we’re lucky if we have it. It’s such a f***ed-up world.”

The house left standing by the end of the story, built by her mother’s makeshift community, is clearly permeable. Rather than asserting false assurance, at least this house is honest about the state of the shelter it provides, complete with leaks and cracks and drafts that echo the flaws in her family, her relationships, her life. Yet with a little help, and by helping each other, Bell and her mother manage to find peace within the new house, respite from a world always just on the verge of bursting into flames.