Here’s another review from the archives, for those who might need a laugh amidst all this snow and ice. This review was originally published in the “Elkhart Truth” in the summer of 2015, and the final installment, “Glorkian Warrior and the Mustache of Destiny,” was released in 2016. If you and your kids—or just you—like this book, check out some of Kochalka’s Johnny Boo series, too, with “Johnny Boo and the Ice Cream Computer” coming out this summer, and “Johnny Boo Is King” next year, both on Top Shelf Books. His new series “Mechaboys” is coming out this summer as well, so let me know how that is if you get to it before my boys and I do. 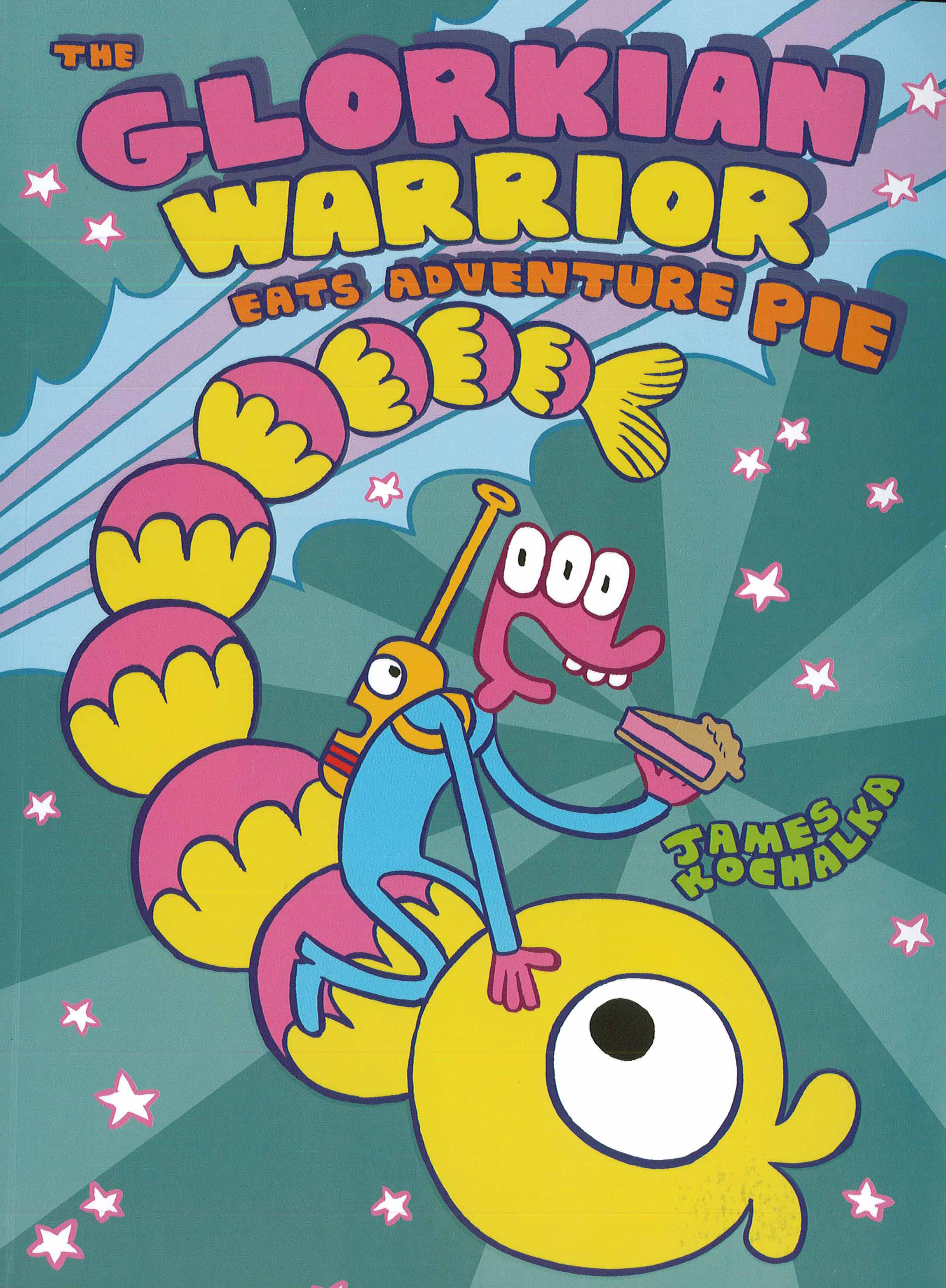 I have a five year old and a three year old—both boys—so the humor in my household tends toward the silly and scatological. James Kochalka, author of “Glorkian Warrior Eats Adventure Pie,” has his finger on the pulse of this market. While such a connection could easily devolve into a gross-fest, Kochalka doesn’t take his responsibility lightly. As he told a “Comic Book Resources” interviewer, in 2014, “I do write really, really silly stuff, but I don’t condescend to my young readers. I’m still trying to make real art, dealing with real emotions in what I hope is a profound way. I think that resonates with all readers, young or old.”

Kochalka is one of the most prolific comics creators in the business, perhaps best known for his autobiographical webcomic “American Elf,” which ran daily for almost fifteen years. Glorkian Warrior, his first new series to fill the gap after “American Elf,” began in 2014 with “Glorkian Warrior Delivers a Pizza,” and the third and final installment is due next year. Kochalka also used crowdsourcing to create his first video game, Glorkian Warrior, which came out in 2014 as well.

Warning: as expertly crafted as this book is, there are still plenty of fart jokes. If you don’t like fart jokes, and you’re under the impression that it’s outside sources like the media, rather than basic kid-human curiosity, that encourage your kids to make fart jokes, then keep your kids far, far away from James Kochalka—and for that matter, from my bad-influence kids, too.

But that would be a shame. As silly as they are, Kochalka’s characters are not only endearing, but surprisingly real—emotionally, at least—for the kid set. The title character, Glork, is a bumbling space patroller, who would have a hard time accomplishing much of anything without the help of his yellow talking Super-Backpack. Glork’s nemesis is Buster Glark, who, despite his spaceship, bears close resemblance to a real-life playground bully. Glark constantly taunts Glork, threatening to report Glork’s many mistakes to the Glorkian Nebula’s supreme commander, the Glorkian Supergrandma.

In this installment of his story, Glork is also “helped” by Gonk, a grammatically challenged but enthusiastic kid, and Baby Alien, who has a dangerous hobby of sucking Glork’s brains, but so sweetly and lovingly that Glork allows it to the point of stupefaction—which drives the plot in the second half of the book.

This scene, which shows the group returning home after the adventures in “Glorkian Warrior Delivers a Pizza,” introduces the characters to new readers: 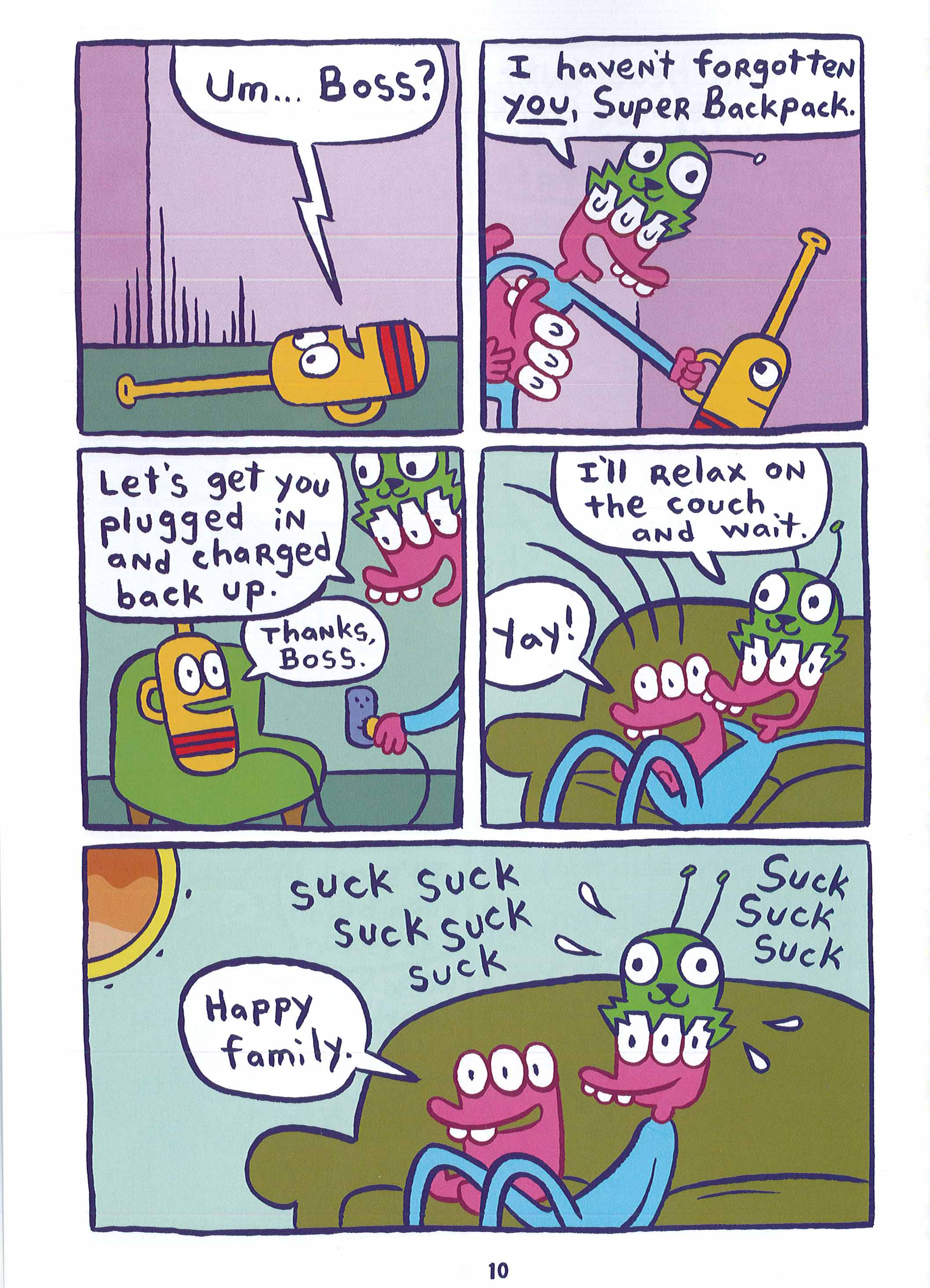 My kids were two of those new readers, and I can report that I’ve rarely heard them giggle quite as uncontrollably at a book as they did when we read this one. To be honest, even thought I’m still ambivalent about fart jokes myself, I was giggling just as hard as they were. What makes this book so cross-generationally successful is Kochalka’s complete mastery of the comics form. My three-year-old, for example, helped me realize how impeccable Kochalka’s pacing is when I heard him describe his favorite page to his babysitter: 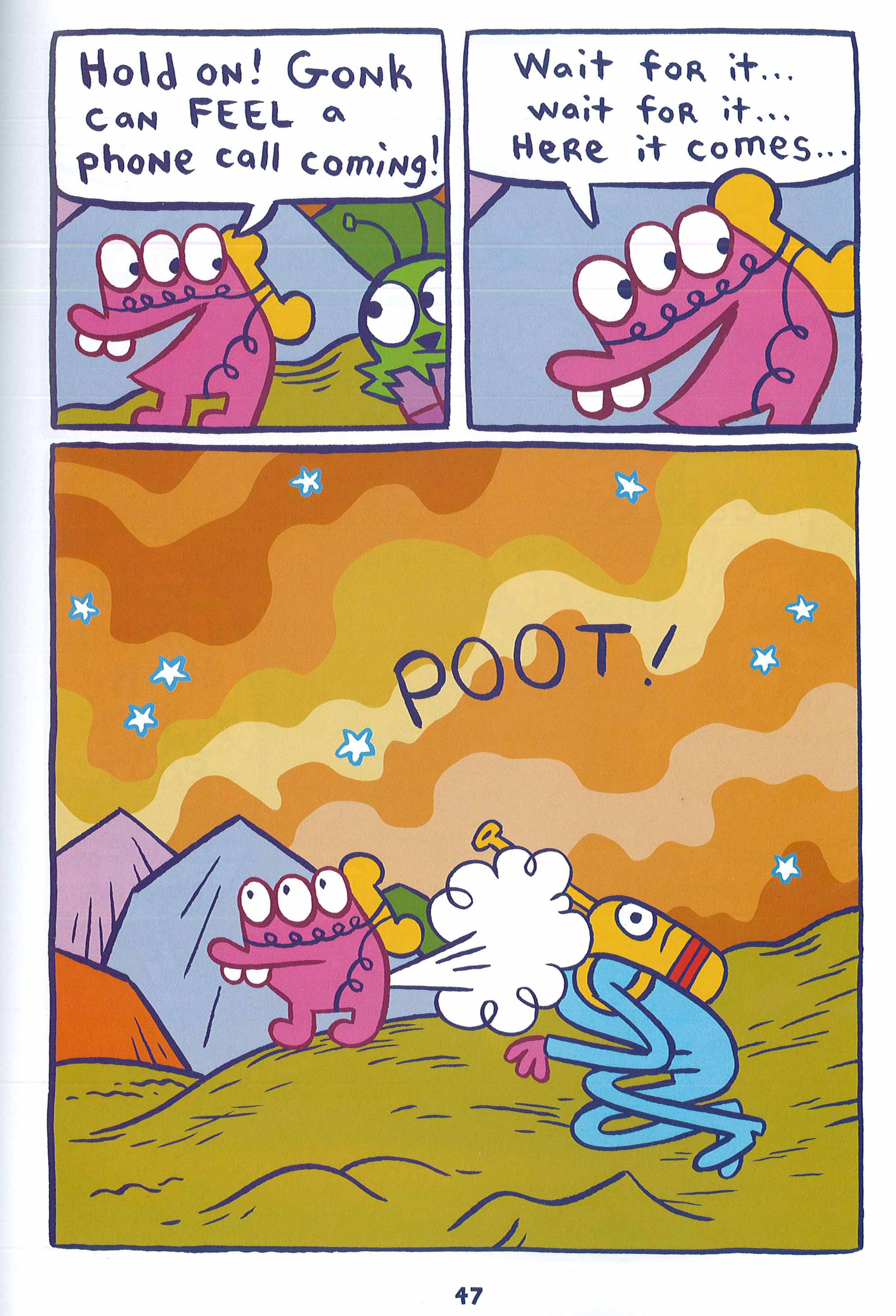 My son didn’t just tell the sitter, “He farted!” but instead narrated the entire lead-up to that last frame, especially the “Wait for it . . . wait for it . . . ” Kochalka’s use of framing also heightens the humor as he zooms in on Gonk in the second frame, then backs out to a larger frame for the punchline. These details are easy to miss because they’re so small amidst such a bright, flashy setting—and because readers will likely be giggling so hard. Subtleties like this take skill to be successful, however, and shouldn’t be dismissed just because they’re silly or a bit gross.

My five-year-old’s favorite page is a bit more . . . I’m going to say “sophisticated” even though I can sense you raising your eyebrows already:

Okay, maybe “sophisticated” is stretching it. The humor is complex enough, however, that I can’t easily explain in this short space why “Eyeball says ‘Hooray’!” had both of my kids laughing so hard they rolled off the couch. It’s worth finding out for yourself, however, especially if you have kids under 12.

The three sample pages above illustrate other elements of Kochalka’s simple brilliance, especially his use of color and line. What kid could resist the cereal-box-like cover of this book? Yet Kochalka doesn’t overdo it: the colors are so bright they verge on over-the-top, but they somehow manage not to clash. Kochalka is one of the rare comics artists who does all of his own coloring and lettering, an important key to the visual coherence of Glork and his friends.

Take a closer look at Kochalka’s mastery of simple line, as well, such as Gonk’s “concentrating face” when he farts—accomplished just by shifting his three pupils up and to the left. Super Backpack expresses his generalized dismay and repressed frustration with tiny indicators like a slightly flattened eyeball and downturned mouth. His cord in the scenes at home also visually reinforces his lack of mobility, and thus his severely limited capacity to herd this group of endearing incompetents for whom he’s responsible.

The listed ages for this book run as low as 5 and as high as 12, but my 3-year-old is evidence that the audience can run younger. Yes, brace yourself for a bit of ick, but there’s enough complication in these bright, simple illustrations that both of my boys wanted to return to particular scenes to look more closely, to figure them out—useful practice in an age of images, when “visual literacy” is an increasingly important skill.

“I like clarity,” Kochalka told “Comic Book Resources.” “I think I like clarity because I find the world pretty confusing, so when I make my art, I try to focus in like a laser beam.” Potty humor or not, this simplicity is the crux of how Kochalka speaks to kids and adults alike, helping us all navigate this confusing and sometimes unfair world with kindness and some semblance of integrity, if not grace.