At first glance, the books up for review in this holiday week seem to have nothing in common except the word “Jesus” in the title. I’ll let the covers speak for themselves: 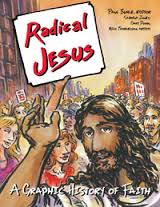 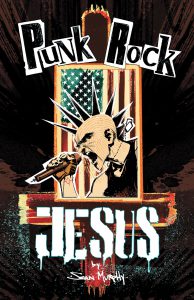 The Jesus in the top image may be “radical,” but it looks like “Chris,” the reality-show Jesus clone below him, could eat him alive. I don’t think it would be a good idea to leave these two alone in a room together, but I was surprised by how much more these books had in common than I would have thought. 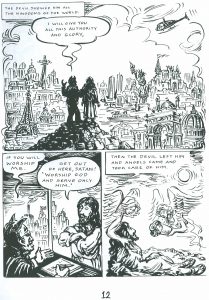 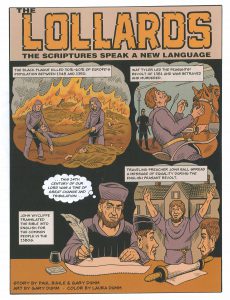 Editor Paul Buhle explains in his introduction that the “color progression” is purposeful: the color palette in the middle section is meant to evoke illuminated manuscripts from the Middle Ages, and the broader range of colors in the final section represent “the full color of modern times.” Yet “modern times” clearly infuse the first section, called “Radical Gospel,” as you can see from the helicopter and architectural landmarks.

Drawing on the tradition of educational comics, which I discussed two posts ago when I reviewed John Lewis’s memoir “March,” “Radical Jesus” is targeted toward young adults, specifically those who might be questioning their Christian faith. As Buhle told Madison’s Wisconsin “State Journal,” he hopes to communicate to Christian youth “that they don’t necessarily need to look outside their own faith tradition to find the peace and social justice values they may feel called to follow.”

“Punk Rock Jesus” also has a social purpose. As artist and author Sean Murphy told newsarama.com, “It tackles issues that I’m very concerned about: religion, politics, media, and the environment.” Politics, media and the environment are referenced in “Radical Jesus” as well, and although Murphy is an outspoken atheist, the crux of his critique of mainstream religion—minus the more cynical and foul-mouthed elements—wouldn’t be too terribly out of place in “Radical Jesus.” “Punk Rock Jesus isn’t a book about atheism nor am I grinding my ax,” he explained. “There’s a character in the book for everyone—at least that’s how I’ve tried to write it. Nothing would bother me more than if I had Christian readers who stopped being Sean Murphy fans because of Punk Rock Jesus.”

“Punk Rock Jesus” is unquestionably dark—but it’s also an example of the brilliance of the classic comics genre. If you’ve been reading this blog about more “highbrow” graphic narratives and aren’t familiar with the more traditional superhero-esque comics like this one, I wish I had more space to convince you why it’s much, much more than biff! bam! pow!—or in this case, “Whud! Thwip! Thuk!” Briefly, here’s one of the more striking sequences: 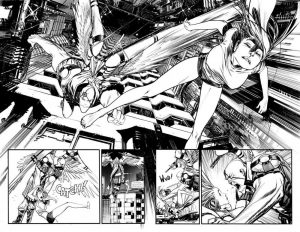 Dramatic visual composition aside, what takes the story beyond its potentially gimmicky basis—a second-coming clone—is that it resists taking sides on the question of real vs. spiritual worlds. This mass-market comic may not get the shiny paper that “Radical Jesus” does, but although Murphy’s plot is a bit over the top at times, it sustains a complicated critique of the thin lines separating seemingly distinct cultural spheres such politics, nationalism, religion, and so-called “reality” culture.

That doesn’t mean that both of these books don’t oversimplify at times. Particularly annoying to this Christian Midwestern mom was when Jesus clone “Chris” takes a cheap shot at “fat, Midwestern Christian housewives” supposedly too stupid to see the contradictions within a violent Christian cult. Similarly, the attempts in “Radical Jesus” to connect the Gospels to the present day end up creating two-dimensional “investment banker” villains, like those on the left: 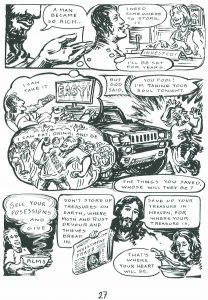 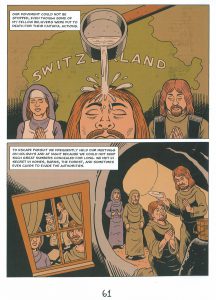 The snippets of history in the book’s middle section, like the page on the bottom from the story of the Radical Reformation, also suggest only one view of history, one side to the story. I found this middle section useful for learning details about historical groups I knew only superficially—the Lollards, the Hutterites, the Quakers—but right after reviewing Gene Luen Yang’s “Boxers” and “Saints,” which took pains to illustrate that any historical event can be told from multiple perspectives, these uncomplicated accounts left me wishing for another side to the story.

When it comes to historical change, however, subtlety isn’t always a virtue, as Nick Thorkelson, the third writer and illustrator of “Radical Jesus,” reminds us: 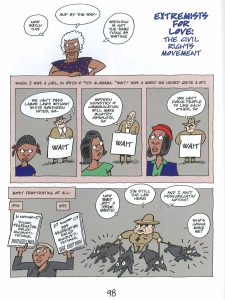 Similarly, while no real-life villain is ever as simple as her or his historical representation, readers love the catharsis of seeing that villain get his due, as does Slate, the corporate magnate who funds the creation of Chris, the Jesus clone. I’ll refrain from posting that image, first because I don’t want to spoil the end of the book, and second, because it’s not terribly Christmasy. Here’s a much more pleasant image to close with, Chris’s bodyguard, a former member of the Irish Republican Army, and a character more engaging than Punk Rock Jesus himself: 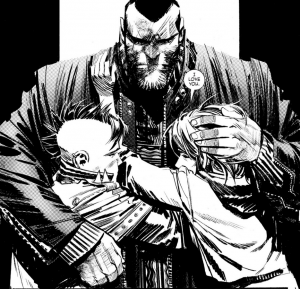 One more day left to finish out your Christmas shopping at Better World Books in Goshen, Indiana.

See you in another two weeks with a review of “Calling Dr. Laura,” a memoir by Nicole Georges.