“Nicole J. Georges: Friend to Creatures” reads the label on the home page of this week’s author/artist. Mainly a writer and illustrator, Georges is also for hire, according to her website, as a pet portraitist, punk aerobics instructor, advice columnist, and teacher of comics and self-publishing workshops, especially for young girls.

Here are some of her drawings and paintings: 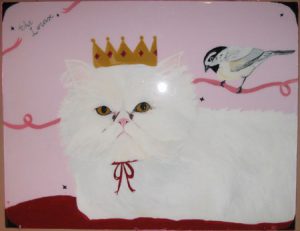 As readers learn in her graphic memoir “Calling Dr. Laura,” Georges is more of a dog person than a cat person, but her sympathies clearly lie with anyone devoted to a pet, since her own dogs—and chickens—have helped her navigate her challenging and unquestionably memoir-worthy young life. 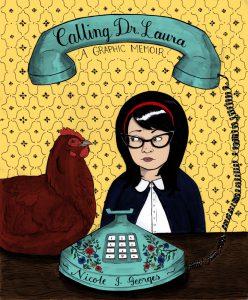 “Calling Dr. Laura” has had a gradual climb to recognition since its release a year ago this month. I’m not the only one to be reviewing it a year late, and I’m also not the only one charmed by its warm, weird and endearing voice: the gushing back-cover blurbs are written by, among others, Rachel Maddow and Alison Bechdel. Bechdel is the author of “Fun Home,” perhaps the most famous graphic memoir since Art Spiegelman’s “Maus,” and she’s an especially appropriate advocate of this book, because although the two works are different on a number of levels, they each intertwine the true story of a lost father with the journey to claiming a lesbian identity.

As Georges explains in the first part of “Calling Dr. Laura,” she grew up with two older sisters from a different father, and was told that her own father died of colon cancer soon after she was born. In her early 20’s, a friend buys her a visit to a psychic as a birthday present, and the psychic tells her that her father is alive. Georges doesn’t make a habit of believing random strangers’ revelations, but something rings true about the statement, and she keeps this part of the psychic’s “prediction” to herself for a year. From there, the story develops the two main challenges at this stage of her life: coming out to her mother and finding out the truth about her father.

Georges’ first serious girlfriend, Radar, is the first person Georges tells, early in the book, about what the psychic said about her father. 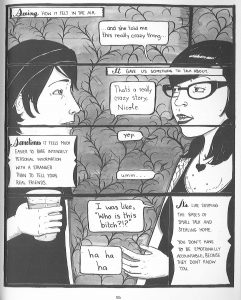 As the storyline moves back and forth between Georges’ adult life and her difficult childhood, it shifts from detailed, stylized drawings to primitive cartoons, which work beautifully to convey wrenching sequences like this one: 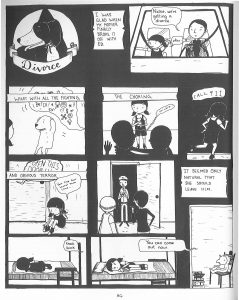 Georges’ history is heavy, but the childlike style of these flashbacks doesn’t oversimplify—it instead makes these scenes more understandable to readers by visually representing the narrator’s sense of helplessness. The illustrations of Georges’ more recent history, although more realistic, still convey a charming simplicity. The first sequence below, for example, tells of Georges’ first same-sex crush, and the second of moving in with her first serious girlfriend—and her four dogs. 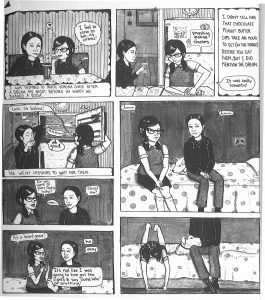 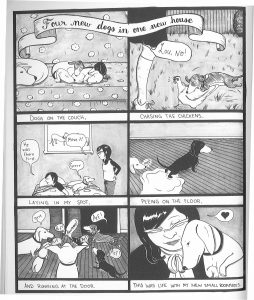 The different visual styles also cue the reader to moments in the adult narrative when the narrator slips back into her childhood self—after a breakup, for example: 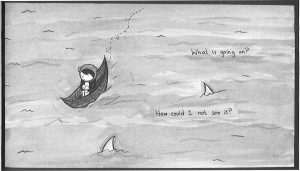 Georges maintains a playful tone when explaining her neuroses, such as her tendency to fall asleep—like a “fainting goat”—when confronted with emotional challenges and to curl inward in the face of conflict: 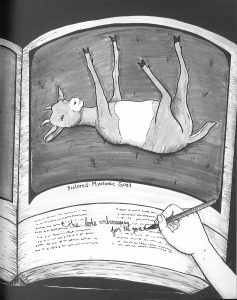 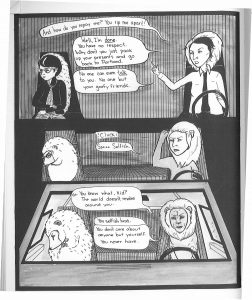 All in all, the drawings are straightforward and “cute,” and you could easily and happily run through this book in a day or two—but as I say often in this blog, don’t let that encourage you to read too quickly. Georges’ Portland backdrop is especially rewarding for the loving detail she lavishes on her adopted city, as well as for the subtle jokes she includes for careful readers. 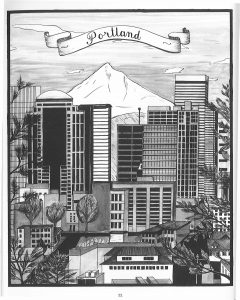 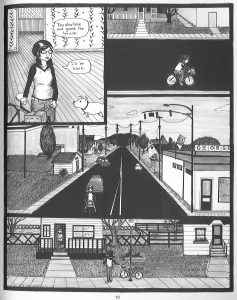 (Hint: Check out the name of the store she’s biking past in the second image.)

A number of the book’s reviews so far critique Georges for not probing deeply enough into her history, but not only is she still quite young, but her discoveries about her father are still very fresh, as we hear in the epilogue. I look forward to more reflective commentary in her next book, but in the meantime, I feel privileged to have been let in on such intimate and difficult revelations—and they make for a great read.

Next up for review: “Woman Rebel: The Margaret Sanger Story,” the most recent book by the iconoclastic comics veteran Peter Bagge.

Thanks as always to Better World Books in Goshen, Indiana for their support of this blog, and for their dedication to keeping good reading nearby in these frigid months. See you in another two weeks.