Drawn and Quarterly sent me a free review copy of this book. Thanks also to Better World Books, 215 S. Main St. in Goshen, for providing me with books to review. You can find or order all of the books I review at the store.

You might expect the first graphic novel to be nominated for Britain’s high literary Man Booker Prize to prove energetic, possibly frenetic, trying to accomplish in images what past winners—powerhouse novels like “Life of Pi” or “Lincoln in the Bardo”—have done with just words.

Yet flip through the pages of Nick Drnaso’s “Sabrina,” and it looks drab, muffled, absent any emotion. Characters range from lumpy to boxy, usually with mere dots for eyes, echoing the work of Chris Ware and Rutu Modan. Yet unlike Ware’s and Modan’s figures, Drnaso’s characters move slowly—painfully slowly.

As readers are lulled into Drnaso’s quiet, lumbering world, it’s often difficult to tell characters apart. The first person we see has short hair, and it takes a few frames to be sure that she’s a woman. A few pages later, we’re introduced to a new character with shoulder-length hair, and until someone walks up and says, “Hey Teddy,” it’s not clear he’s a man. On the Air Force base where much of the story takes place, standard-issue camouflage further muddles individual characteristics and identity cues.

As Drnaso told R. J. Casey of “The Comics Journal” back in 2016, with the release of his short story collection “Beverly,” “At a certain point I realized that stripping away was more effective than going in and adding things—at least for ‘Beverly.’ I wanted to tear things down to their essence.”

“Sabrina” cuts to its essence emotionally and conceptually as well as visually. Despite the story’s emphasis on how awkward people can be with each other, Drnaso’s slow-motion world comes across as not only enveloping, but weirdly personal. The characters readers get to know best are Sandra, Teddy, and Calvin. Sandra’s sister Sabrina makes only a brief appearance at the very start of the book before she disappears.

We first meet Teddy, waiting at a Colorado airport before being picked up by Calvin, a friend from high school, who brings him back to his house. We discover that Teddy, grieving a lost girlfriend, needed to get away, and Calvin agreed to take him in, despite the fact that he hasn’t seen Teddy in a while. To make matters worse, Calvin is going through a recent separation: his wife and daughter have left him and moved to Florida.

Minor spoiler: not too much later, we find out that Teddy’s lost girlfriend is Sabrina. Once the details about Sabrina’s death hit the news, all three of the surviving characters are pulled into a destructive media frenzy, fueled largely by conspiracy theorists, and all three of the characters fumble through various ineffective methods of maintaining their mental health. We even see some of the daily mental health evaluations that Calvin fills out at work, 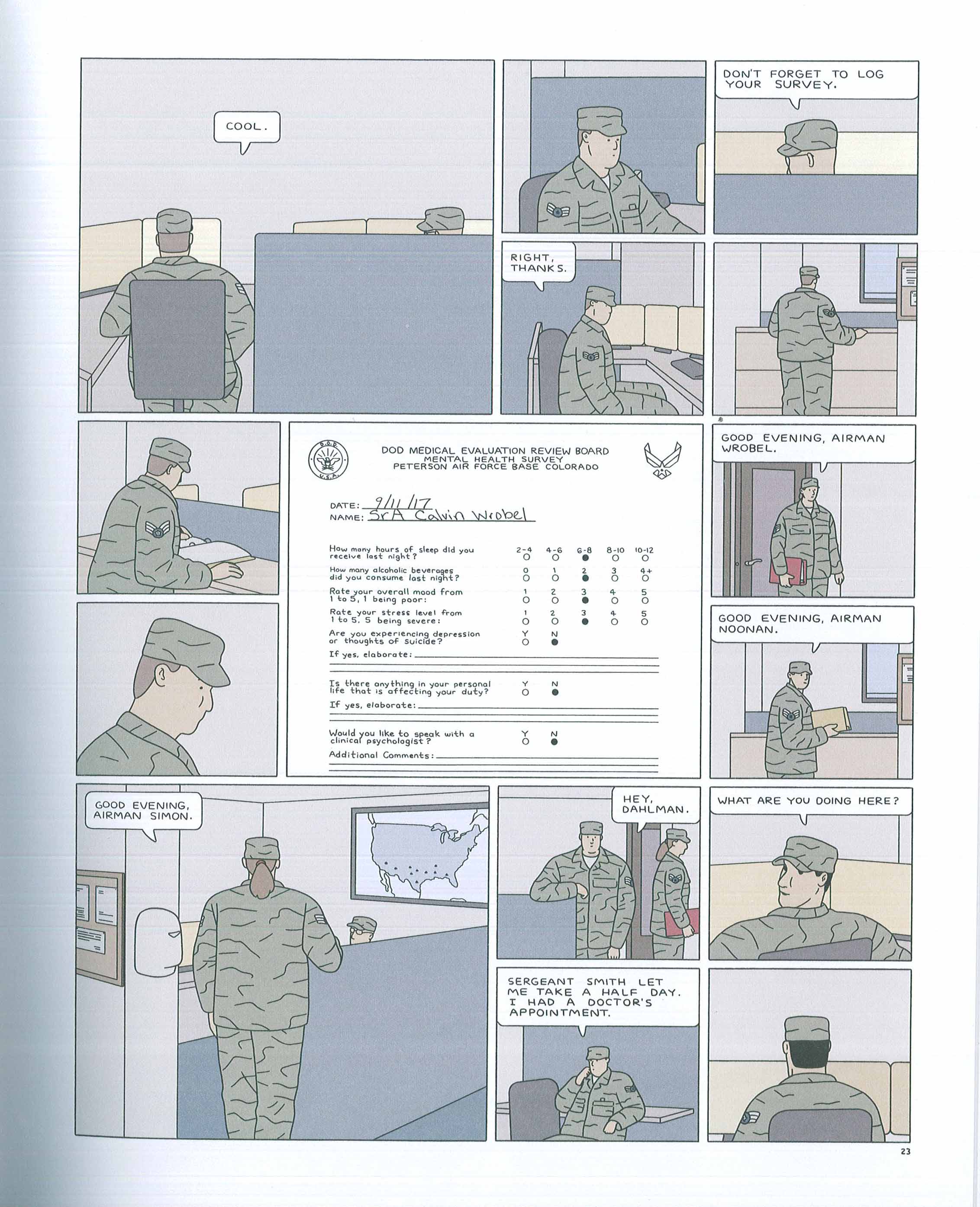 and begin to suspect him of stretching the truth, and sometimes of flat-out lying.

Calvin is supposed to be taking care of Teddy, and he tries, leaving fast food outside Teddy’s door when he comes home from work in the evenings. After a while, however, it’s unclear who’s taking care of whom: neither man seems equipped to function in this already profoundly messed-up world.

The above page also exemplifies the power of color in Drasno’s pallid world: gray cubicles take up big chunks of the frames, and that red binder under the woman’s arm becomes an oddly bright light on the page.

The highest panel count per page in “Sabrina” is twenty-four. You might expect more panels to translate to more action. Instead, however, much as in Adrian Tomine’s work, Drnaso uses small panels to heighten repetition, as in this page of a Skype session between Calvin and his estranged daughter:

Those two vertical rose-colored rivers act as a beacon to both Calvin and the reader until they’re emptied, his daughter distracted and moving out of the frame. As Josephine Livingstone notes in her “New Republic” review from August, Sabrina isn’t the only one in the book who disappears, and empty panels tend to hold as much if not more power than crowded ones, especially if someone has just left.

Even when Drnaso’s frames are crowded, a closer look defies reader expectations. Teddy, for example, finds a book that Calvin’s daughter left behind, which initially appears hopeful, a way to lighten the visual mood. But on closer inspection, the colorful scene is darker than it first appears: 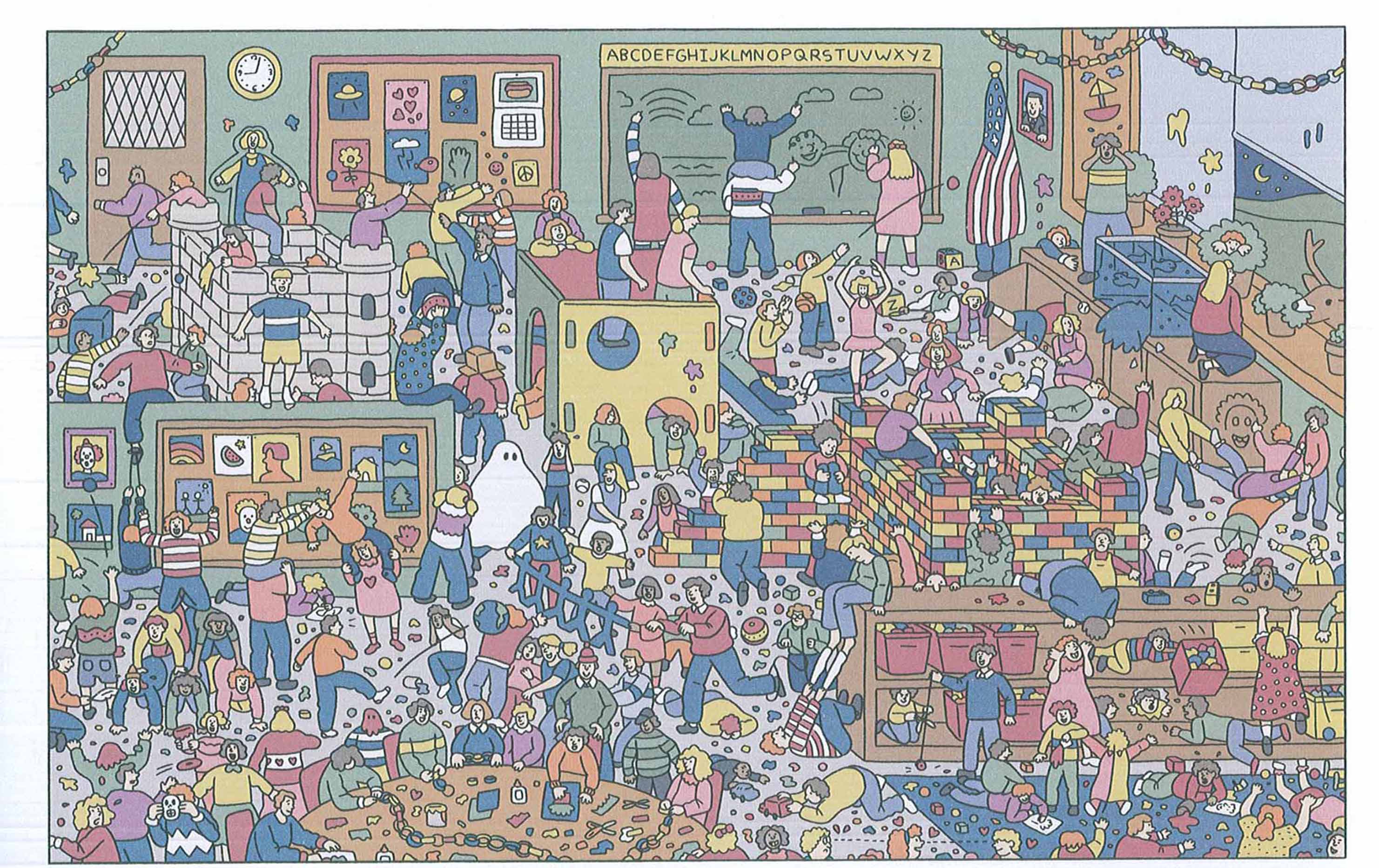 Kids are being ambushed, chased, hit, and otherwise terrorized within the frame. This is a violent scene, but it’s also portrayed as matter of fact—none of the kids is protesting the violence. This page opens the rest of the book up to the many forms of violence our culture has been trained to ignore: Calvin plays a shooter video game with his work friends in his spare time, which turns out to be less violent than the TV’s news of a 9/11 anniversary, radio “news” of Sandy Hook conspiracy theory deniers, and the emerging online reports of the details of Sabrina’s demise. This unacceptable level of violence that we’ve all learned to suppress plays a role in robbing the main characters of any useful process of grief.

Yet Drnaso also highlights the violence that doesn’t happen: guns that don’t go off, threats that aren’t carried out, suspects who turn out to be innocent, and a lost cat that gives one seemingly lost character a newfound sense of purpose—while also connecting that character to this opening scene of Sabrina before she disappears: 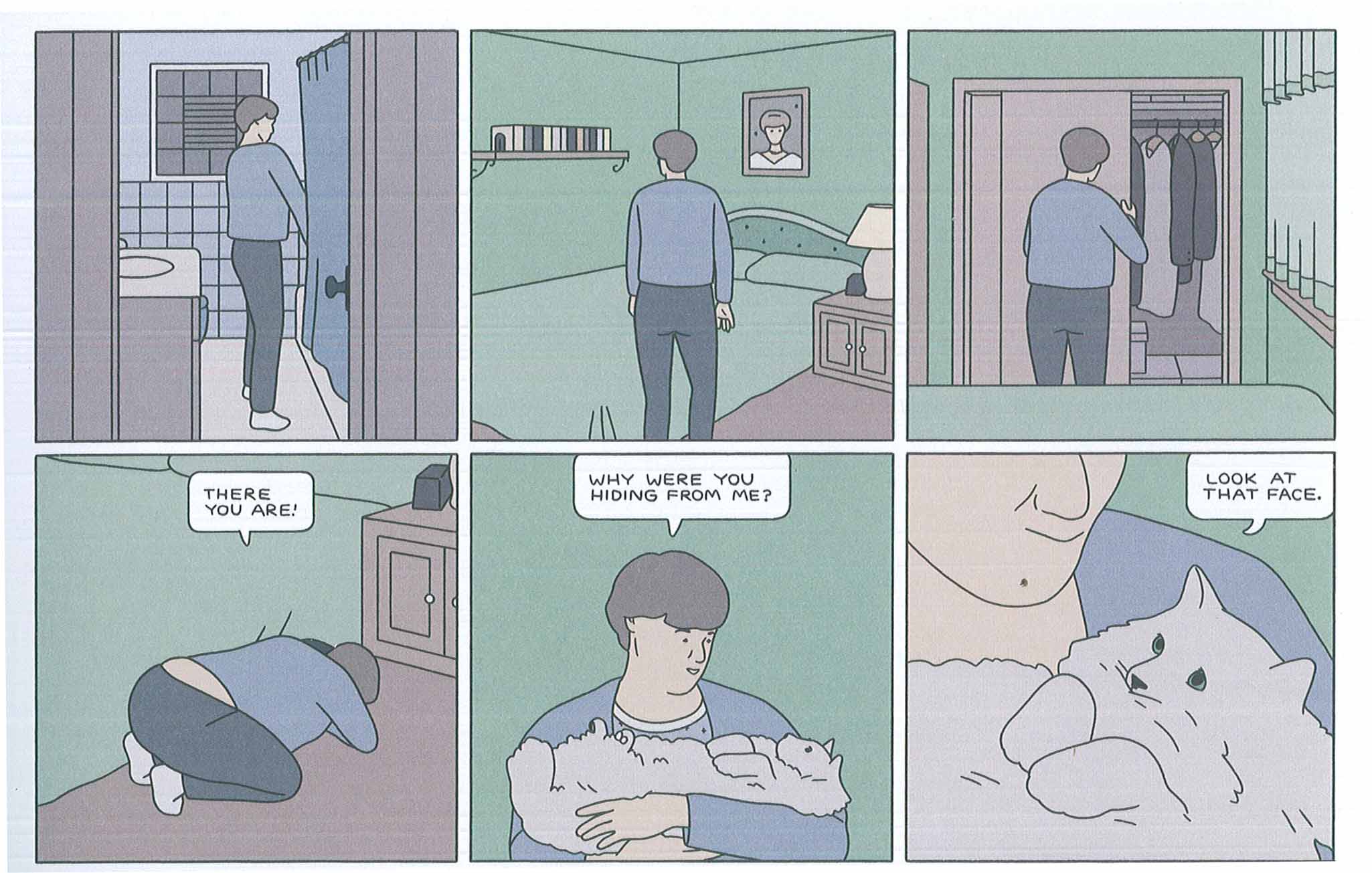 When it comes down to it, these characters still do their best to take care of each other, and despite some spectacular failures, I won’t spoil anything by telling you that things turn out okay—not great, but okay.

The publisher’s summary claims that “Sabrina” will “leave you gutted.” I disagree: “spent but thoughtful” is a better description of how I felt at the end. For one, the mystery and twists in the narrative make it a rewarding versus merely exhausting read. Further, “Sabrina” is clearly a book for our current moment, in which the first lady cites anti-bullying as her cause celebre, while online bullying spouts unchecked from our nation’s highest office.

As Drnaso told Patrick Dunn of “The Comics Journal” this past May, “there’s a moment of reckoning now about who we are. I think all of these things lead to self-reflection and just taking a good hard look at yourself, which can be very painful and scary.”

I don’t want to mislead you: “Sabrina” is definitely scary, as well as intense and sometimes depressing. It’s also utterly engrossing, a thoughtful take on our times, and a stunning example of the best that comics can do.