COVID-19 UPDATE: Amazon’s super-slow for books right now: you can get books from your local bookstore even faster, Goshen folks! E-mail or call Fables, and you can pick your books up curbside or have them delivered. Contact the store at fablesbooks@gmail.com or call (574) 534-1984 to order.

And don’t forget about gift certificates, a great way to support Fables, as well as Goshen’s other downtown small businesses during the crisis. 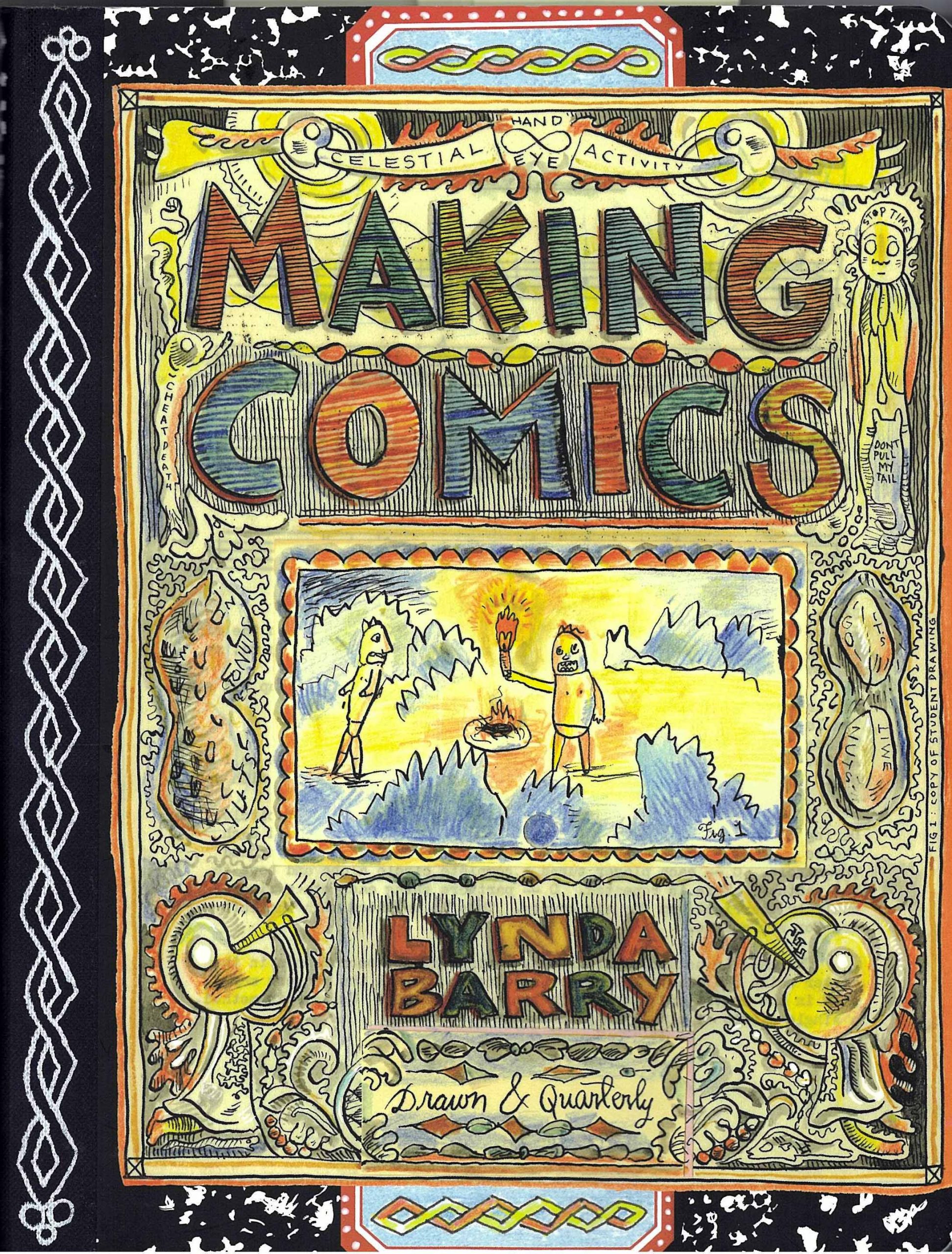 Lynda Barry is like a crazy cat lady for drawings. She gathers and nurtures lonely, awkward, and abandoned drawings, the drawings that you gave up on when they didn’t turn out like you’d planned. “Making Comics,” the most recent book from this artist, novelist, professor, and creativity guru is a weird and beautiful hybrid—per usual for this recently recognized MacArthur “genius.” Part inspirational narrative and part activity book, “Making Comics” teems with recopied drawings that her students threw in the trash or left behind in class. Barry has been taking in stray drawings like these for years, not out of pity, but out of boundless and judgement-free love. 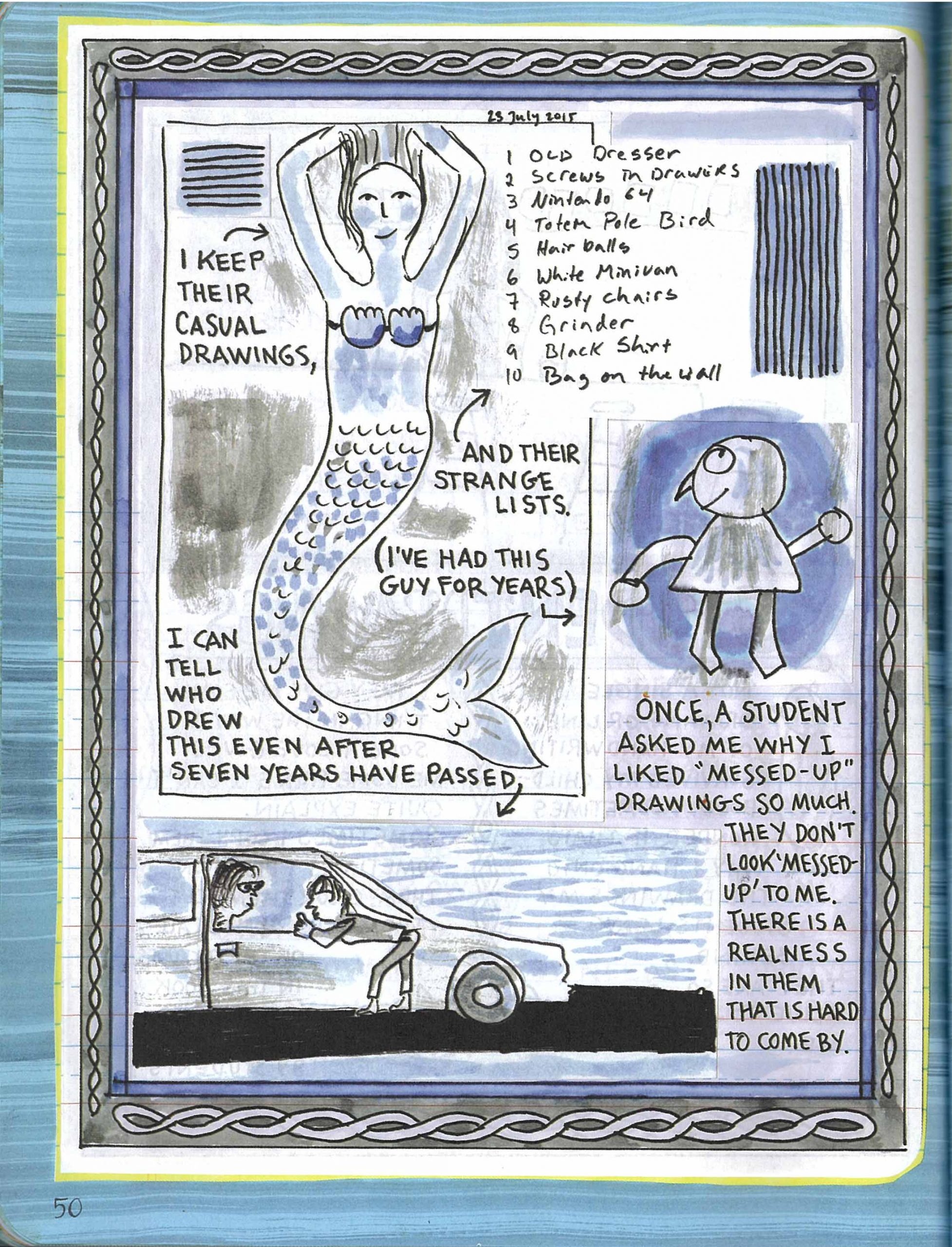 “The people who think they can’t draw do the most original work,” Barry writes in her energetic yet precise all-caps, “though at first they can’t see it.” She makes a point of filling her classes with students who locate themselves on a broad spectrum of artistic confidence and practice, because “The people who can draw pick up a lot of new ideas” from the less experienced. The main requirements for getting into one of Barry’s classes at University of Wisconsin-Madison: be prepared to work hard, and remain open to learning and trying new things.

That openness, Barry has found, can be hard to sustain as adults. “Part of the theory in the book is that drawing is one of our native languages, and that it’s taken away too early,” she recently explained to “Vox.” “And that split happens, I think, partly because the adults around us are really freaked out about drawing. They’re scared to draw.” As Barry points out on the page below, which explains the pedagogy behind her daily file-card “attendance cards,” “people can be very cruel to their own drawings, and kinder toward the drawings of their classmates”: 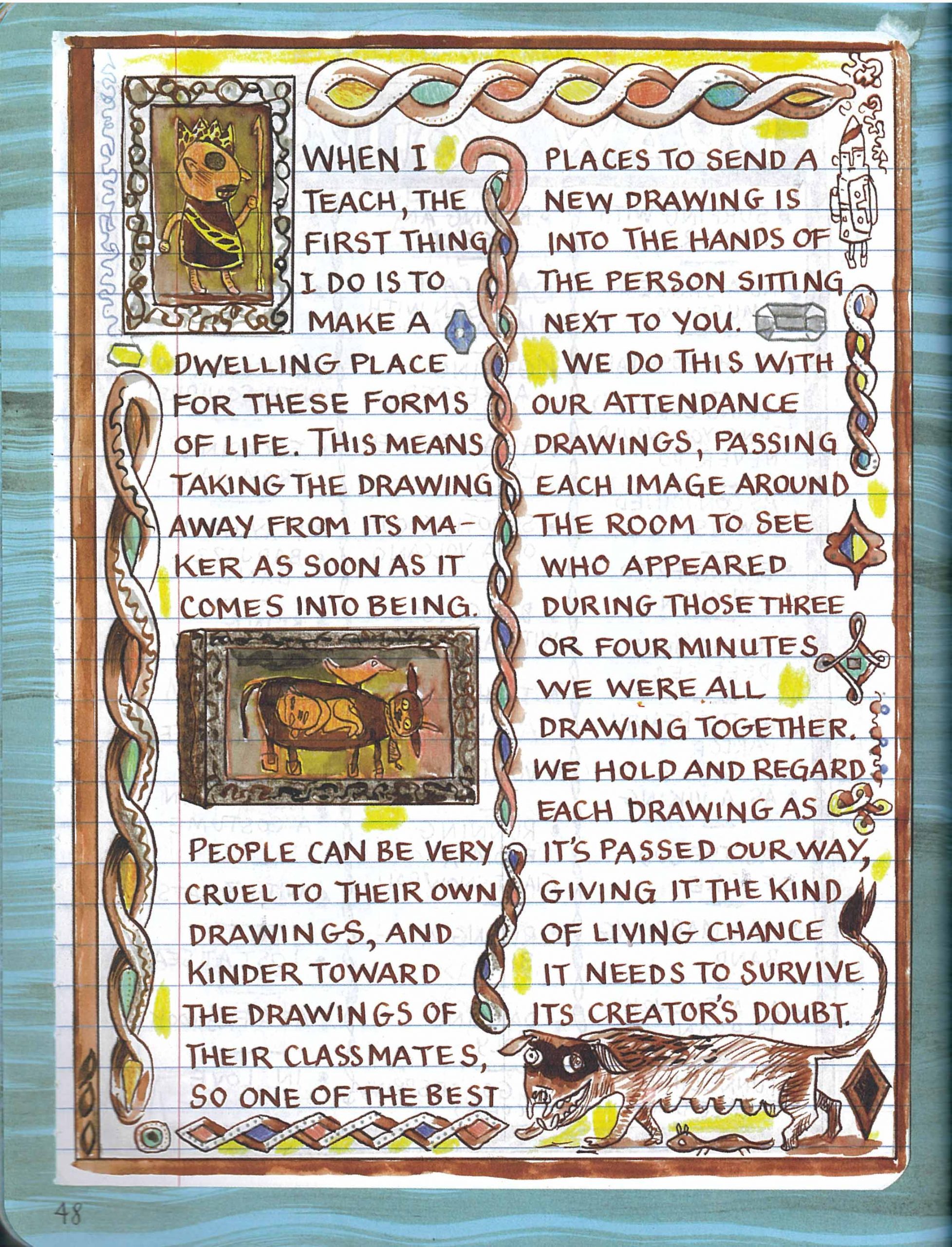 Upon first glance, “Making Comics” looks a lot like Barry’s 2017 book “Syllabus,” but this new book is more directive and less pedagogically reflective—her critics might say less rambly. As she explained to “Vox,” the book “is actually built like a cookbook. I wanted to make a book that had some really clear philosophy, but also had some really clear exercises, including how long [each] exercise is going to take.”

After an introduction and an overview of “Materials, Methods, [and] Classroom Culture,” “Making Comics” launches into three main sections of activities, which build in complexity. The first section of “recipes,” “Are You My Monster?” is focused on encouraging people who think they can’t draw to re-inhabit the drawing self they abandoned as kids—or in the case of well-trained artists, to let go a little bit, try out new techniques, and just play. Section Two, “Character Jam and Other Jams,” is packed with exercises long and short to help you practice drawing (without getting too worked up about it), while the third section, “Story Time,” helps you build narrative structure around your drawings.

The voice in “Making Comics” toggles between cheerleading—if I can draw, you can too!—and highly entertaining explanation and reflection. Yet despite Barry’s ever-encouraging tone, some of my students have found her visual style too busy and overwhelming, and even a bit disturbing. As you can see from the example above, her pages are chock full of doodles, scribbles, and busy hand-painted borders—sometimes even borders within borders, as in this excerpt from the collaborative “Face Jam” activity: 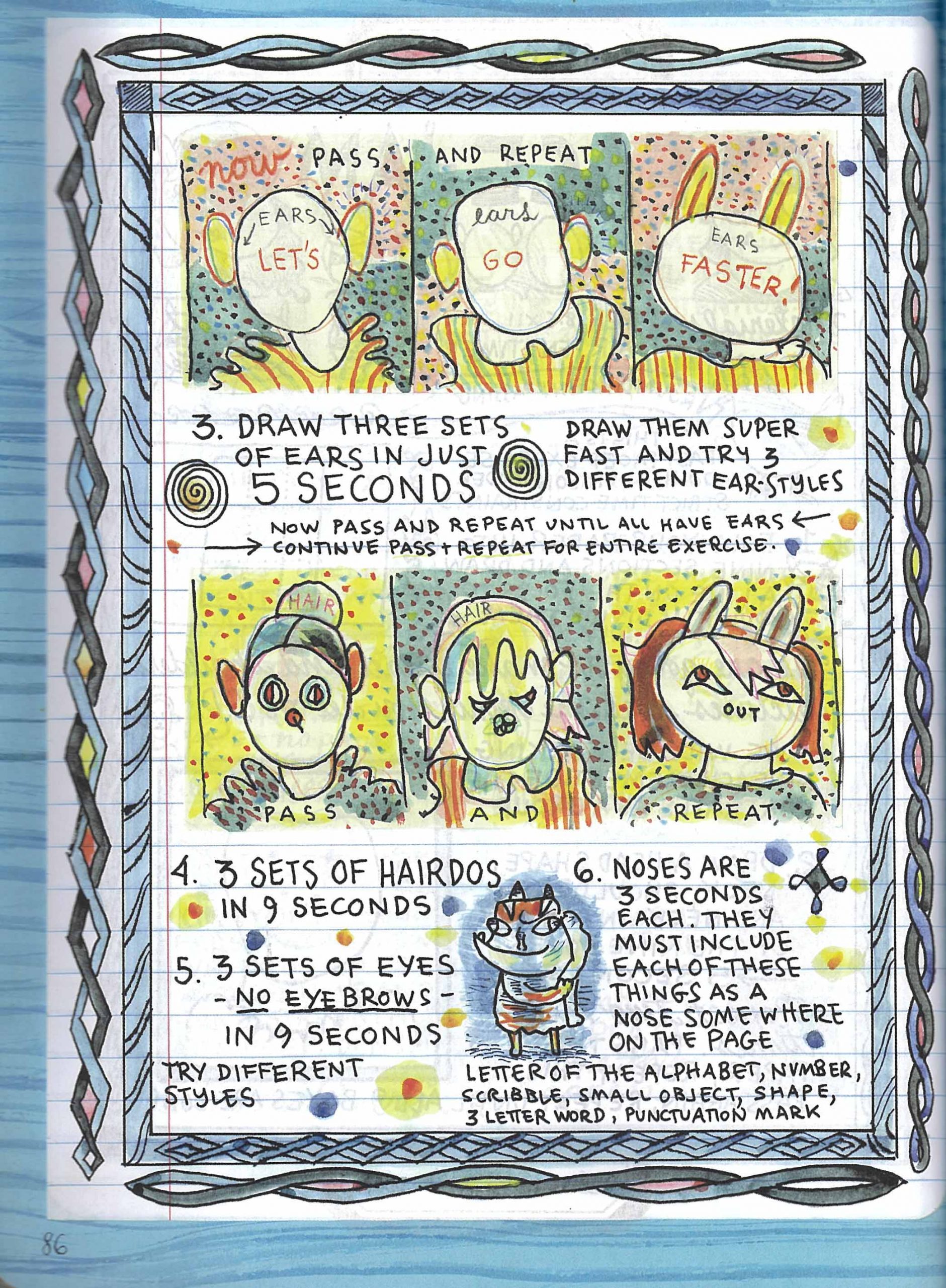 Usually, Barry just takes some getting used to. Once readers learn that they don’t need to absorb and interpret every single detail—they can “read” her drawings like they might read a new foreign language, just getting the gist rather than understanding each and every word—they relax a bit, and can enjoy her drawings for their quirky style and sheer exuberance.

One other reason that students sometimes resist Barry’s work is that they find her visual style “messy” and/or substandard. She’s fine with that, as long as such critics don’t try to quash other people’s appreciation of artistic expression. The book’s back cover beautifully sums up Barry’s democratic take on the worth and purpose of art: 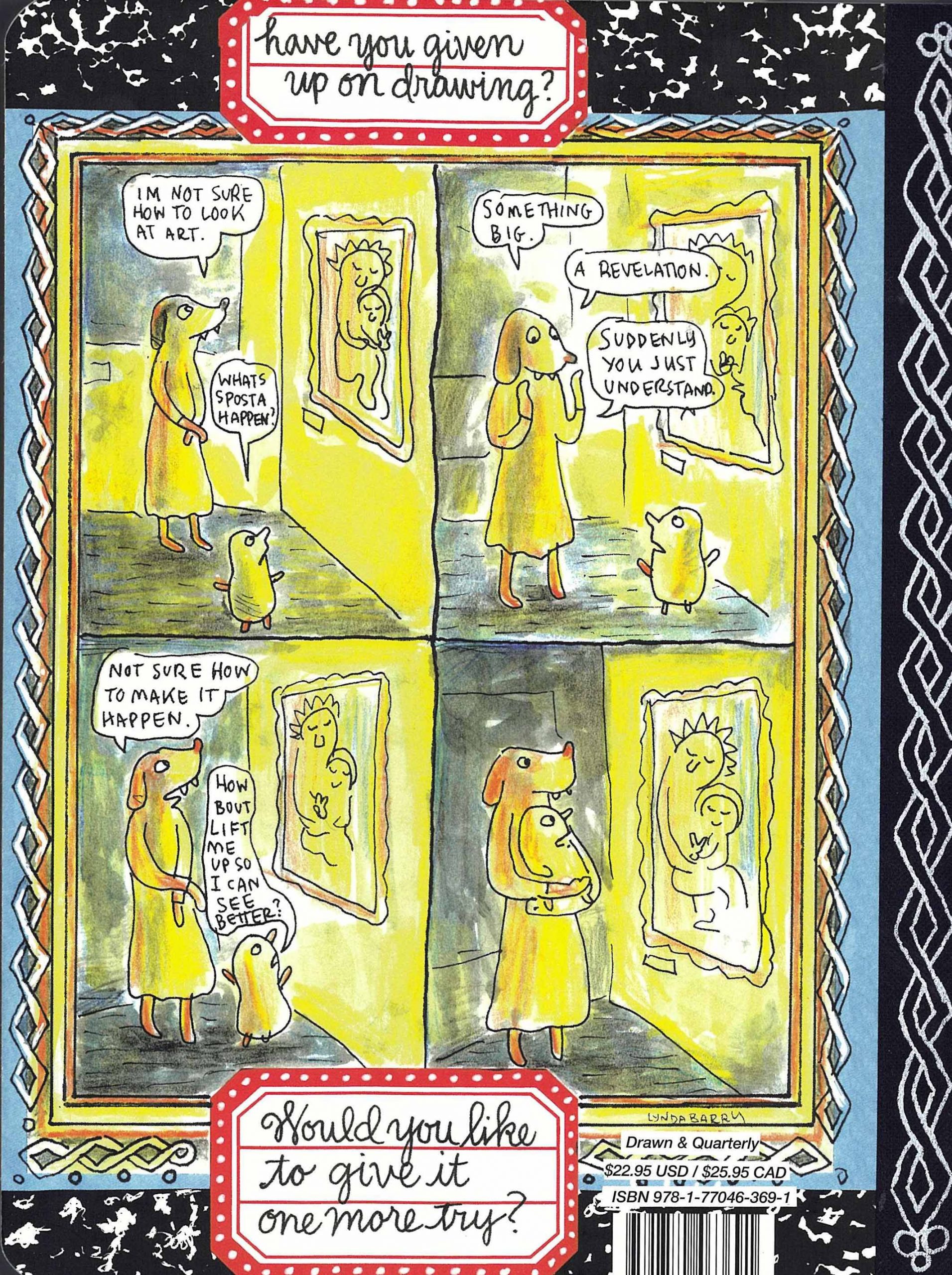 “The key is to draw bravely,” writes Barry to her more anxious students and readers. Do you get anxious about drawing, too? Were you also taught at an early age that there was a single correct answer to whether a drawing was “good” or “bad”? “Making Comics” doesn’t promise that it will save you or cure you or turn you into Picasso, Basquiat, or Frida Kahlo. But at the very least, it might inspire you to give your creative self another chance.

One Reply to ““Making Comics,” by Lynda Barry”