This review was first published by the Elkhart Truth in October 2014. Thanks to Better World Books, 215 S. Main St. in Goshen, for providing me with books to review. You can find all of these books at the store. 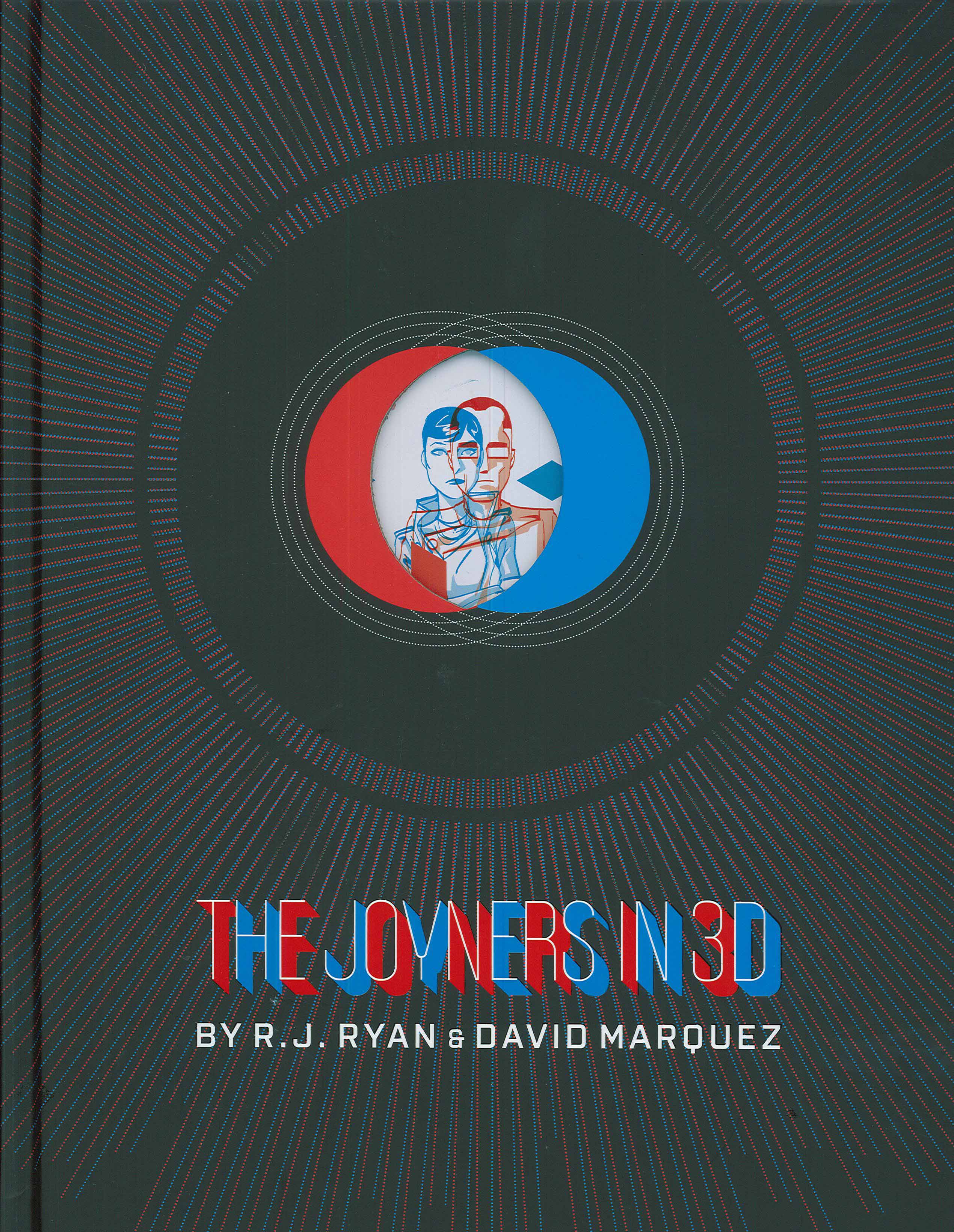 A book is a technology that doesn’t often come with instructions. The instructions for “The Joyners in 3D,” by R.J. Ryan and David Marquez, are mostly tongue in cheek, recommending that readers take “snack breaks” from their 3D glasses to avoid “lightheadedness, memory loss, or heartache.” Give yourself enough light as you read, the authors explain, and the glasses included in a pocket at the back of the book will grant you the “simple but irresistible illusion of depth.” 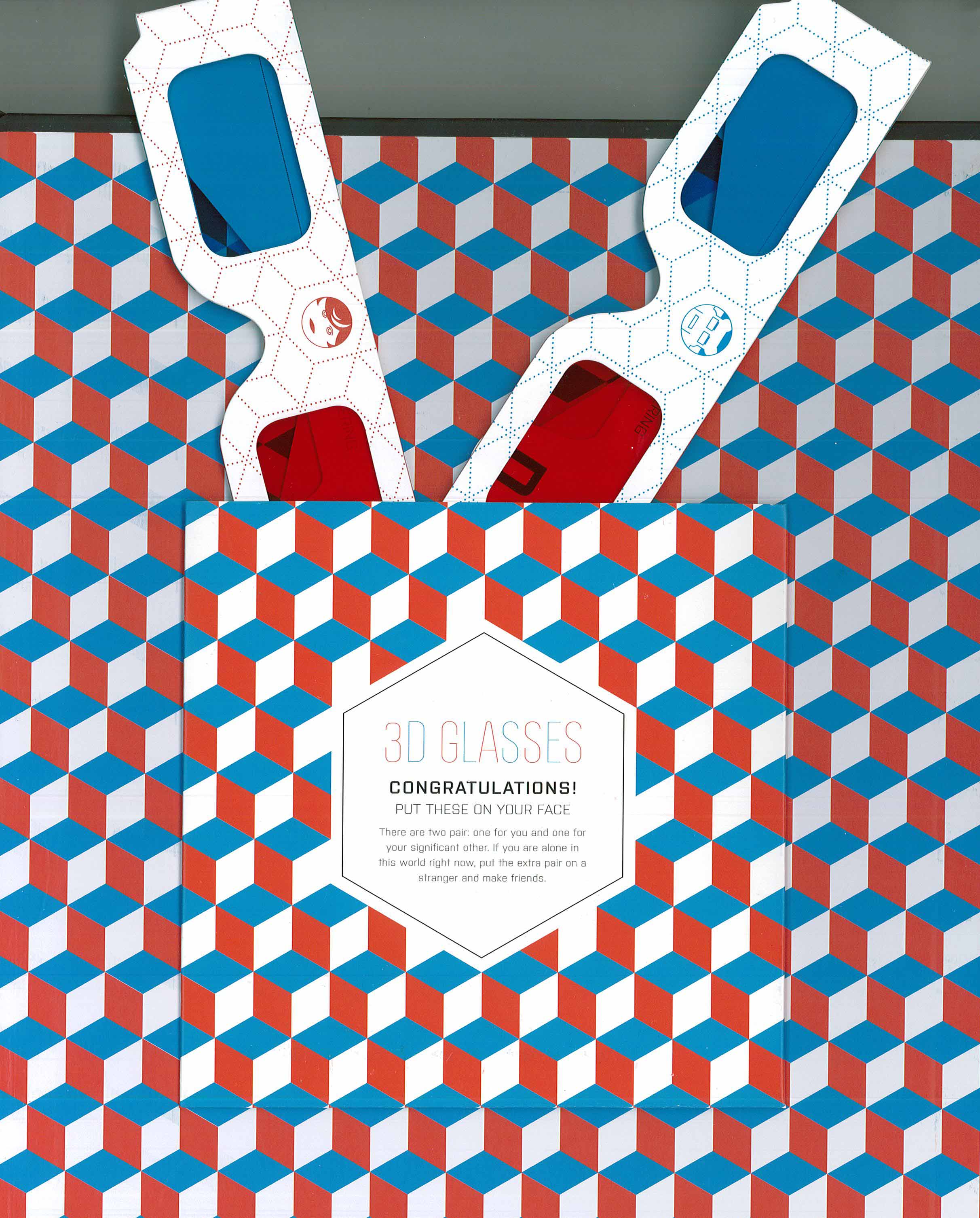 To be honest, the glasses are pretty resistible, at least at first. The packaging is sharp and smart, but those glasses are a pain—the stems aren’t quite long enough, and kept slipping off when I first tried them out. So I thought maybe I’d try to read through the text without the glasses, then go back and look at the 3D. No luck. The text is all in 3D too—partially for effect, but probably also a tactical choice to discourage lazy, vain people like me. Unless you’re braver—or at least more of an attention monger—than I am, you’re probably not going to sit around the coffee shop looking like this: 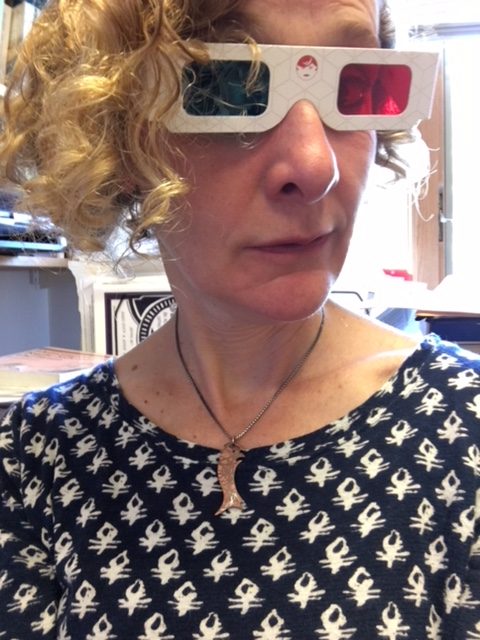 Fair warning: if I do see you reading this book at a coffee shop, I’m going to bug you for your opinion—because I was surprised how attached I got to this book, especially once I figured out how to stay the cardboard stems by tucking them under the stems of my own glasses.

The 3D elements in “The Joyners” are carefully thought out and tastefully executed. Rather than employing visual stunts to startle readers, the authors play with layering of not just people and backgrounds—buildings, landscapes, planets—but also word bubbles, panels, and sound effects, all of which catapult the reader into what seems like a new and dizzying world. 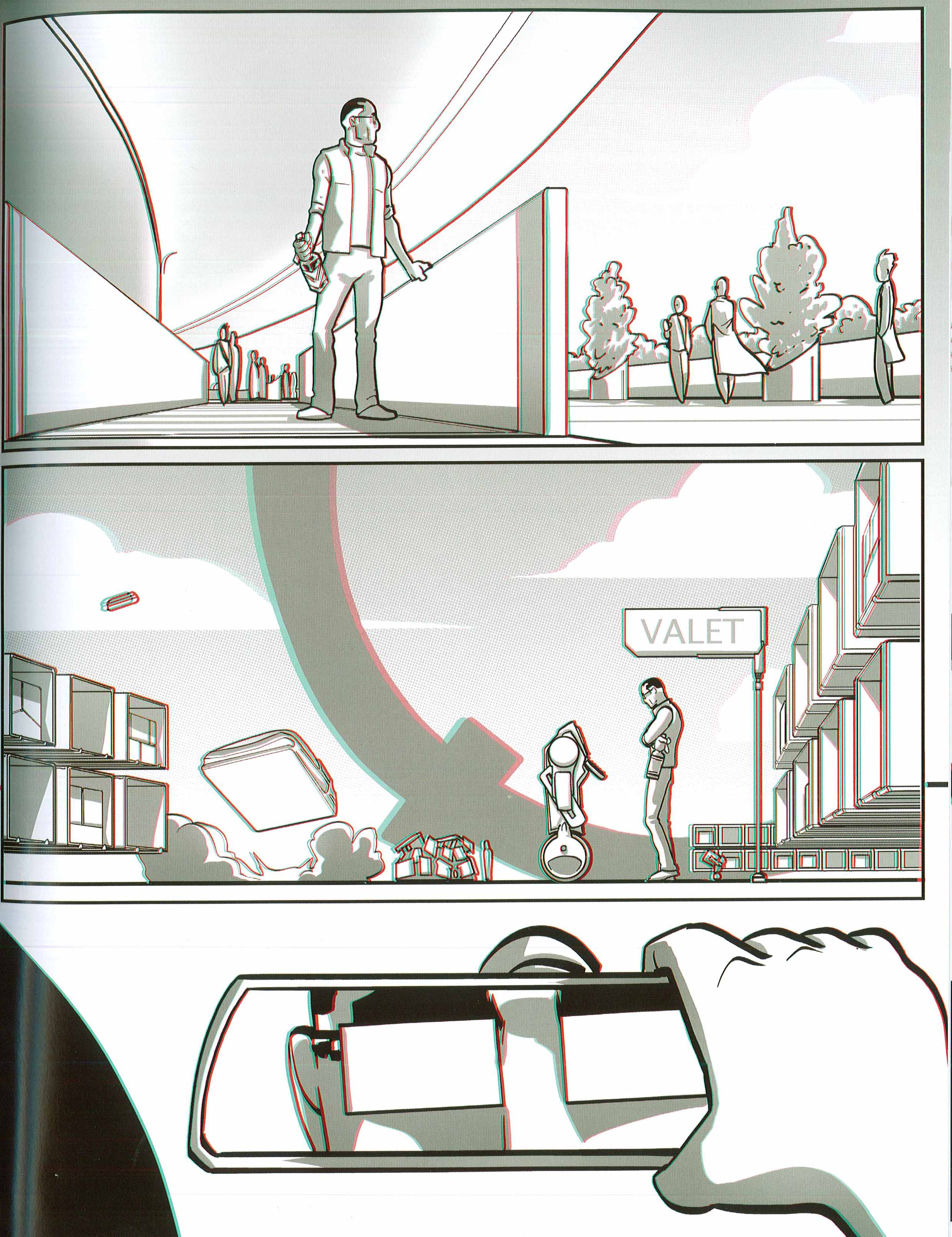 It’s really only 2062, however, and aside from flying cars and vacations in space, things aren’t as newfangled as you might think. More than one reviewer has noted the book’s nod to the 1960s cartoon “The Jetsons,” especially because the protagonist is also named George. But while “The Jetsons” was the sci-fi version of “Leave It to Beaver,” “The Joyners” is the sci-fi version of a dysfunctional twentieth-century family, from a John Cheever story, perhaps. 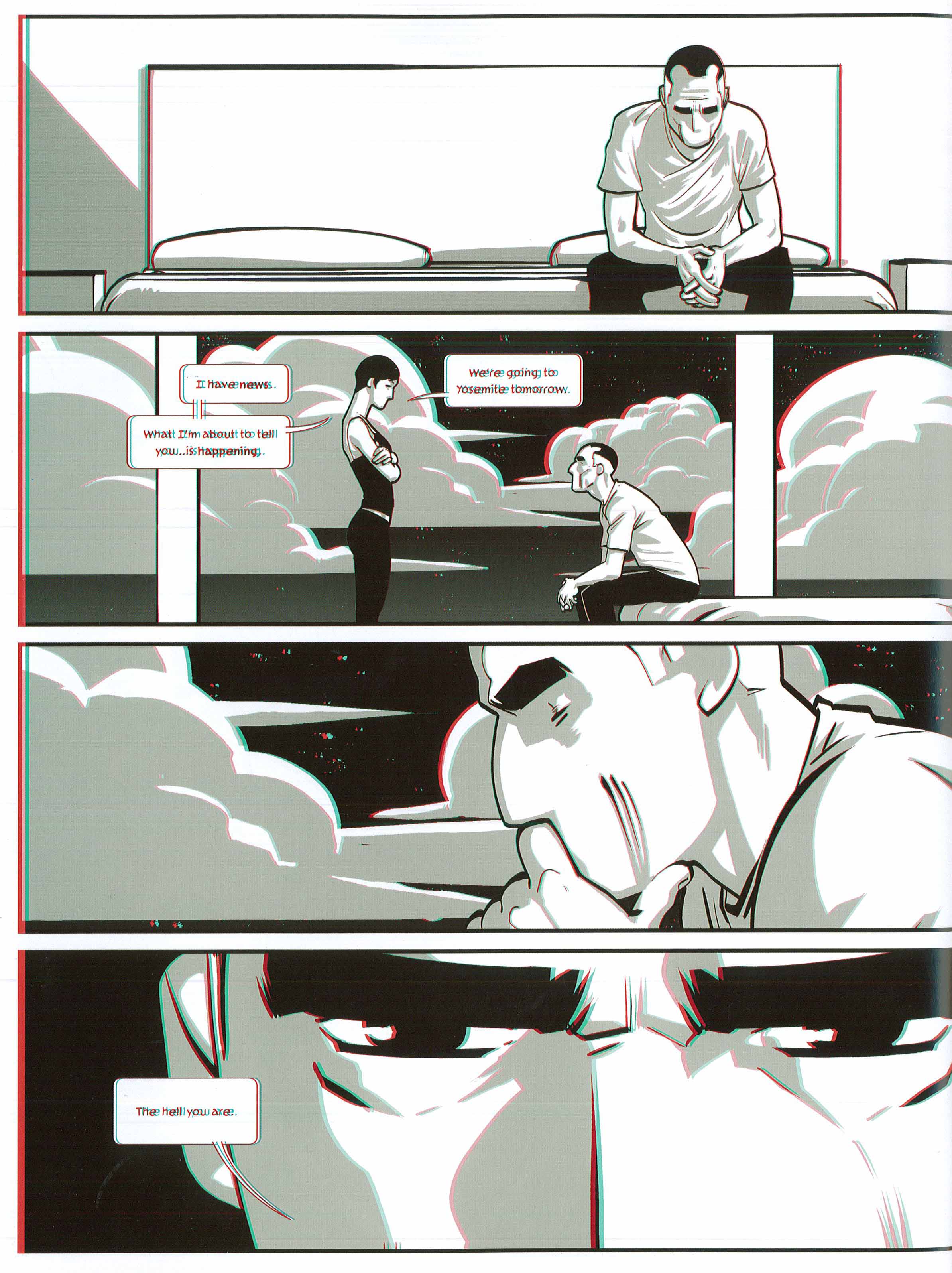 George Joyner, the patriarch of this fast-fragmenting family, has grown accustomed to his futuristic toys—some of which, as a high-raking executive for a major tech company, he helped bring into the world. Readers are initially taken in by his excitement over a new invention. Yet our hopes are dashed when we discover that Joyner is as superficial as the world he helped to create: as a character, he also emanates the aforementioned “illusion of depth,” then falls into the stereotypical missteps of a midlife crisis.

Like Chris Ware’s “Building Stories,” this is the type of reading experience you simply can’t recreate online. Yes, you can search online for 3D “anaglyph” or “stereoscopic” pictures—especially once you have the glasses. But the real experience of this book rests in a nostalgia that requires a book in your hands—a nostalgia for a time when those ridiculous “futuristic” glasses actually signaled a new and hopeful future.

We know better now, but the Joyners’ world is still worth a visit before the format—and Joyner himself—disappoint us. 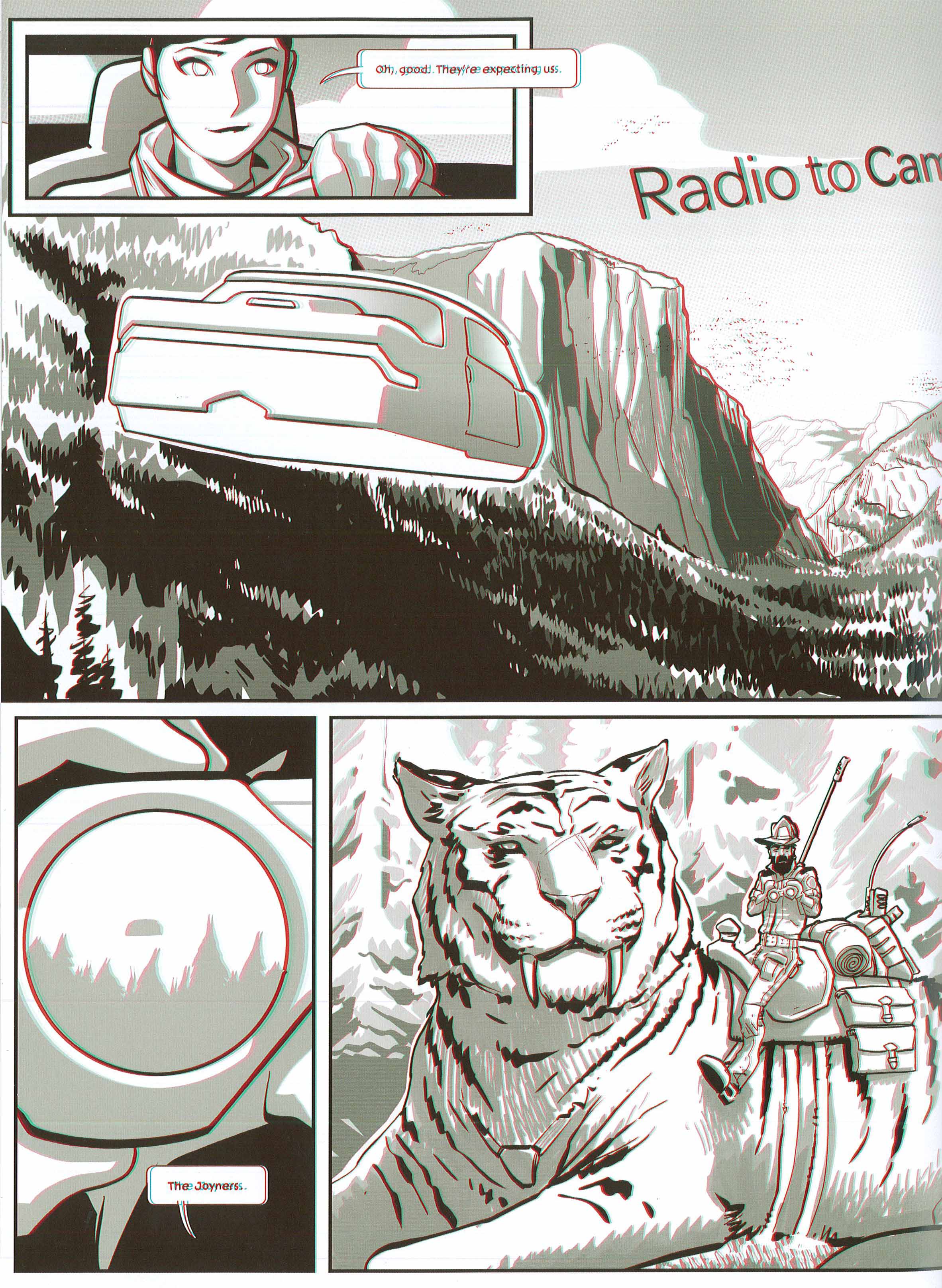 Which brings up one of book’s main shortcomings: except for some earthbound and ersatz American Indians, the book’s main characters are all white, all wealthy enough to keep up with the latest technology: it’s as if the 3D glasses keep us on that superficial upper crust of the one percent, obscuring the “real” world that must lie beneath.

Is that part of Ryan and Marquez’s point? Is there room for more social commentary in a book like this? I’m not sure I’m being fair with this critique, especially since the authors gave fair warning about any seeming depth in the story being mere illusion. In short, don’t expect the depth of Ware’s “Building Stories,” another recent comic that came with “instructions.” Ryan and Marquez are working from the mainstream—Marquez’s day job is with Marvel—although Jon Adams, the project’s designer and letterer has worked extensively with highbrow darlings McSweeney’s.

In short, the narrative might not stand up to multiple readings, but the visuals do: it’s fun and fascinating to visit Ryan and Marquez’s retro version of 2062. “Flying cars. Cities in the sky. It all happened so fast,” says the narrator of a “60 Minutes” clip about George Joyner embedded into the story—and once you’ve got the glasses, you can delve into history as well as the supposed future. As Marquez said about “The Joyners” in a 2013 interview on iFanboy, “ “we’re writing a love letter to traditional old-school 3D comics.” Which makes this book a steal at #29.95: once you buy it and have the glasses, search online for more 3D anaglyph comics, and you’ll find a history—if not a new future—that will reach out and grab you.