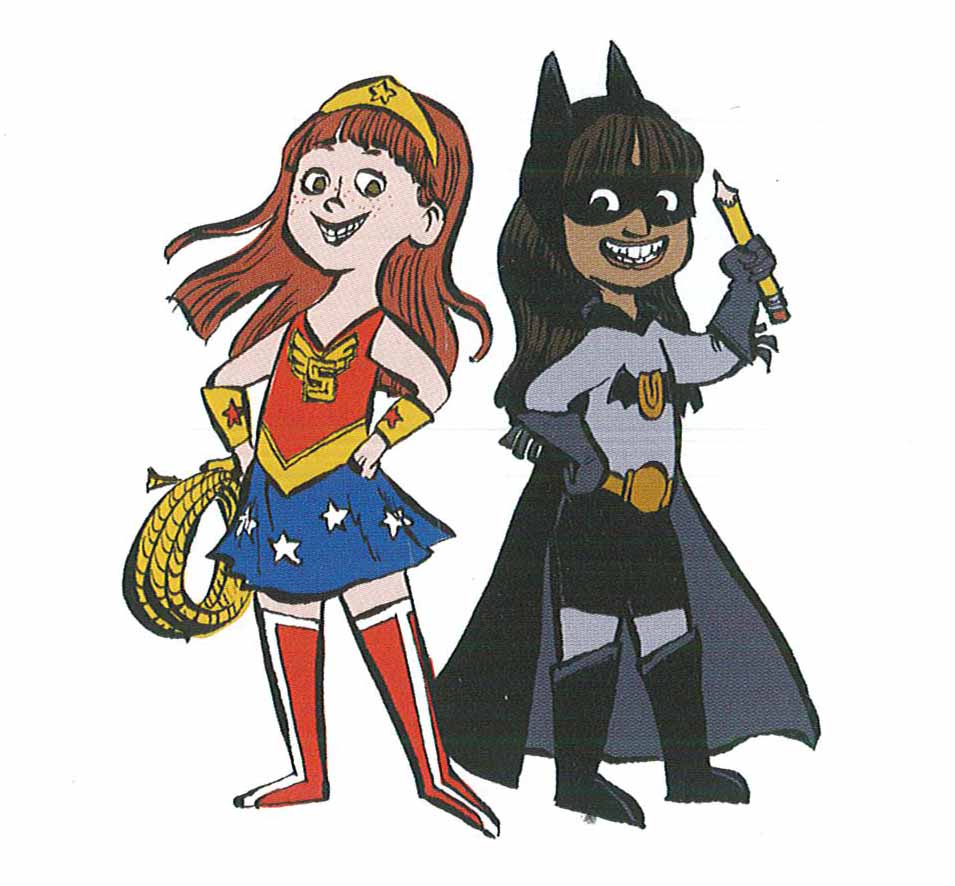 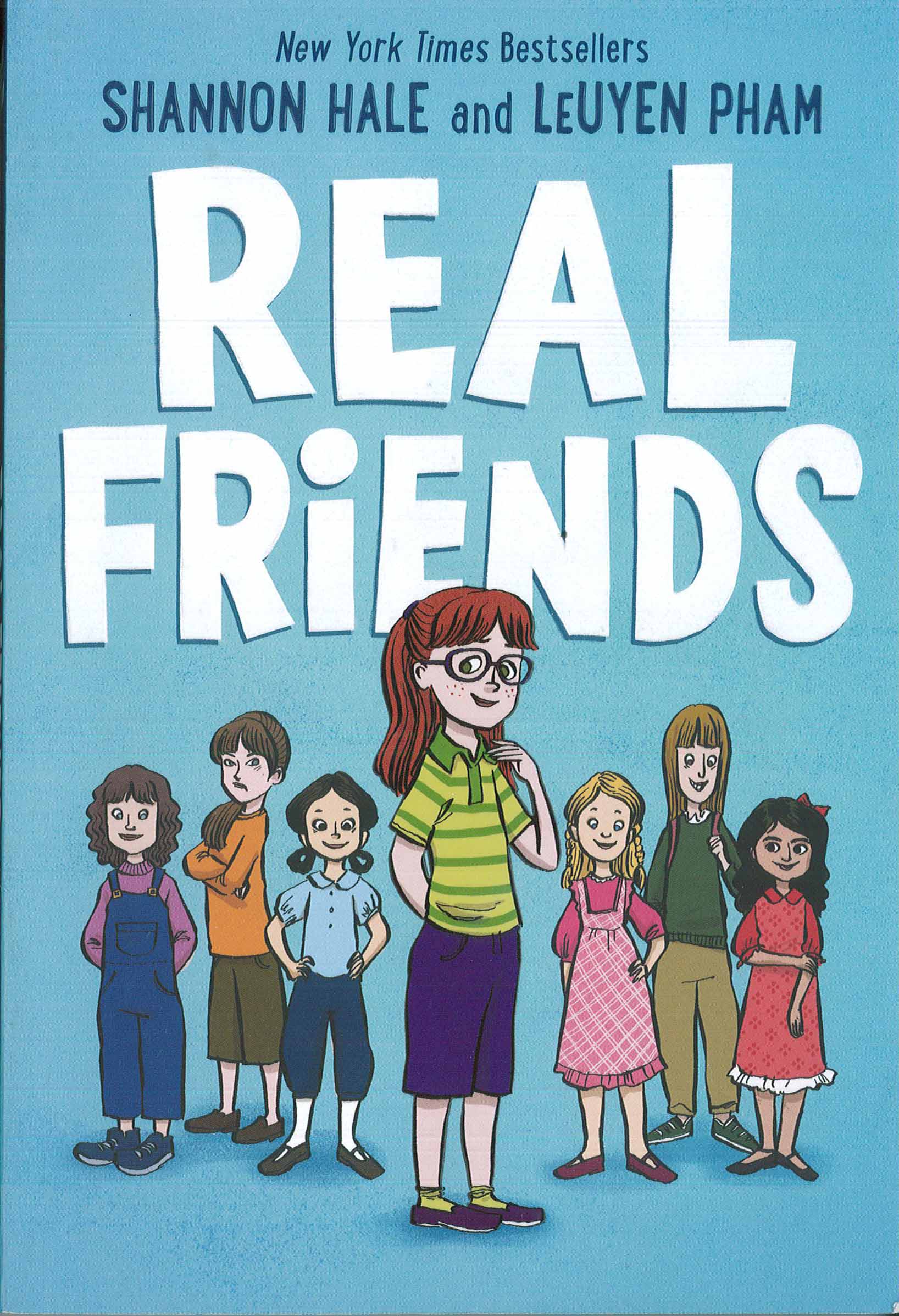 Anti-bullying campaigns are so prevalent these days that, if you don’t have school-age kids yourself, you might think bullying in schools must have been successfully overcome. But we’re human animals after all, and as evidenced by some of our current political figures, there are some really mean people in the world. Thank goodness for books like “Real Friends,” which don’t shy away from the realities of mean people, but help young readers—not to mention adults—put them into perspective.

Shannon Hale has written and co-written more than twenty books and graphic novels—mostly for kids, although the adult series “Austenland” has been successful as well. “Real Friends” is Hale’s first graphic memoir, as having a protagonist named Shannon might suggest. “I changed all the names except my own, Hale told Entertainment Weekly, “because 30-year-old memories and my own flawed perception of events could never do justice to anybody else’s reality.”

We first meet this younger version of Shannon in the late 1970s, when she is on the verge of starting kindergarten, and terrified that she won’t make any friends. That first day of school turns out much better than expected: she almost instantly finds Adrienne, her new best friend. When Adrienne abruptly leaves town, however, Shannon begins her very bumpy road to finding and keeping the “one good friend” that she overhears her mother saying she needs.

Most reviews of this book gush about the way it unflinchingly represents the trials of elementary school’s unique version of mean. To the book’s credit, the character Shannon is shown committing her own fair share of mistakes and small meannesses, too. For the most part, however, we see Shannon suffering the all-too-relatable (for most of us) likes of this, 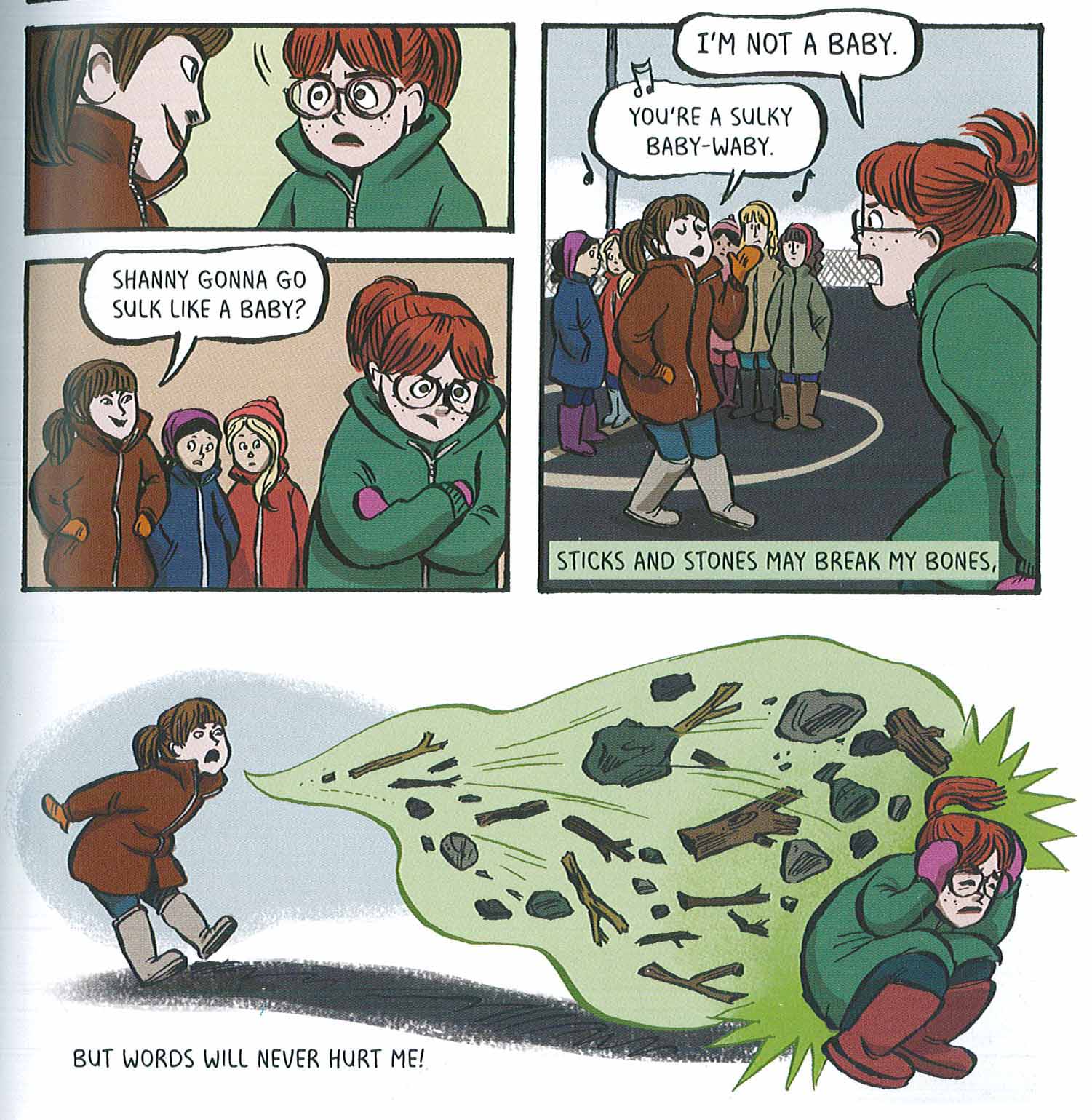 and employing her early writer’s imagination to retaliate with the likes of this: 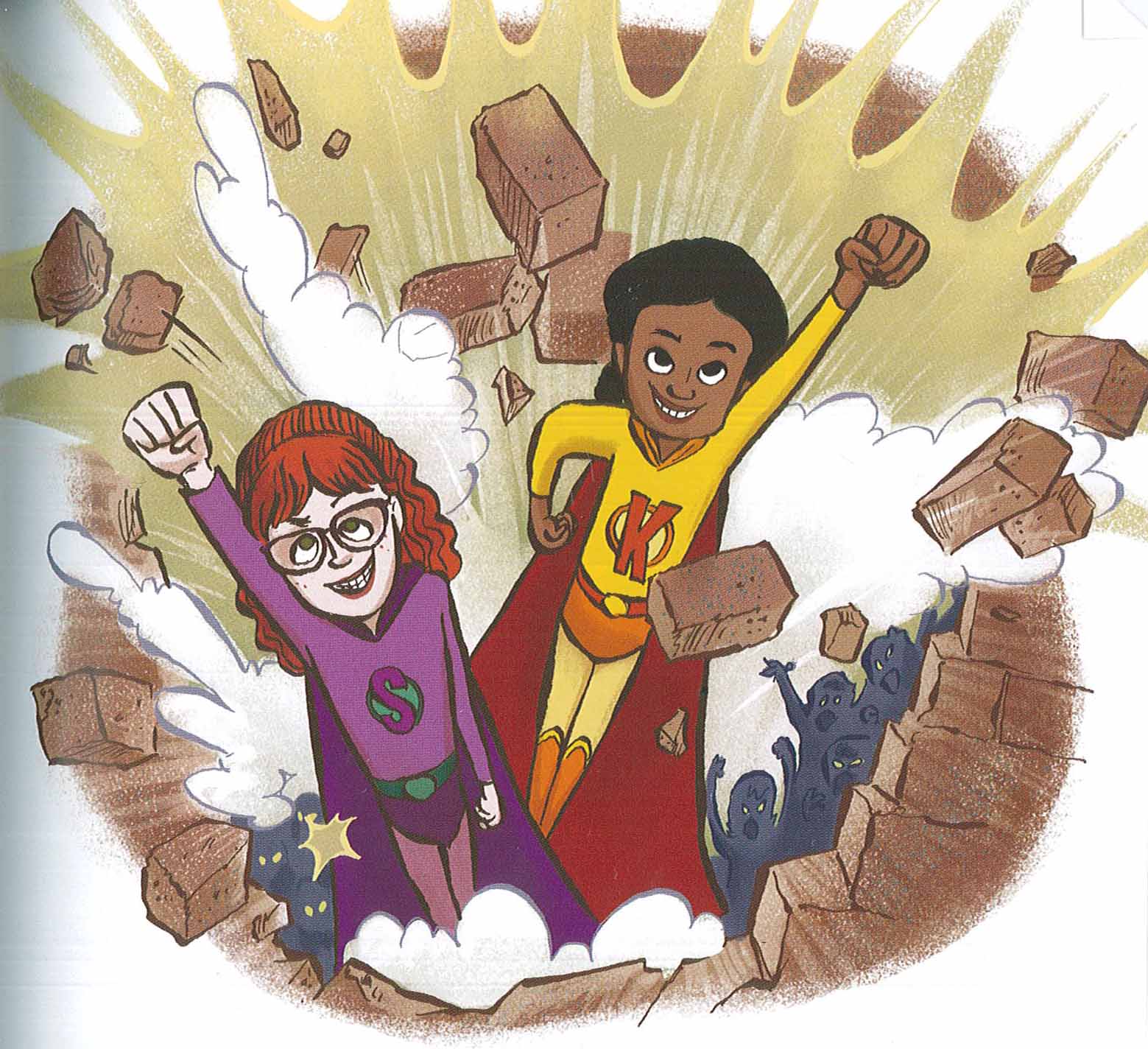 You can tell by these images that illustrator LeUyen Pham is a crucial factor in this book’s success: her visual representations are simple, but hit right to the gut. As Pham told a School Library Journal interviewer, “My goal was to keep it in close ups, so that you felt the emotion directly through Shannon’s character. . . . But in doing that, I had to zoom in on faces and show anxiety and fear and love and uncertainty from a really tight angle. There was no escaping for me. . . . [I]t got tough at times.”

Shannon’s struggles within her own family are some of the most difficult in the book. After all, if your world outside the home is a struggle, you need a safe haven to return to. Yet Shannon’s home life is often just as chaotic as the playground because of her personality clash with her eldest sister Wendy. Five years older than Shannon, Wendy is often put in charge of the household, and Shannon takes the brunt of her wrath. Pham, however, tempers these painful and terrifying moments with incisive humor: 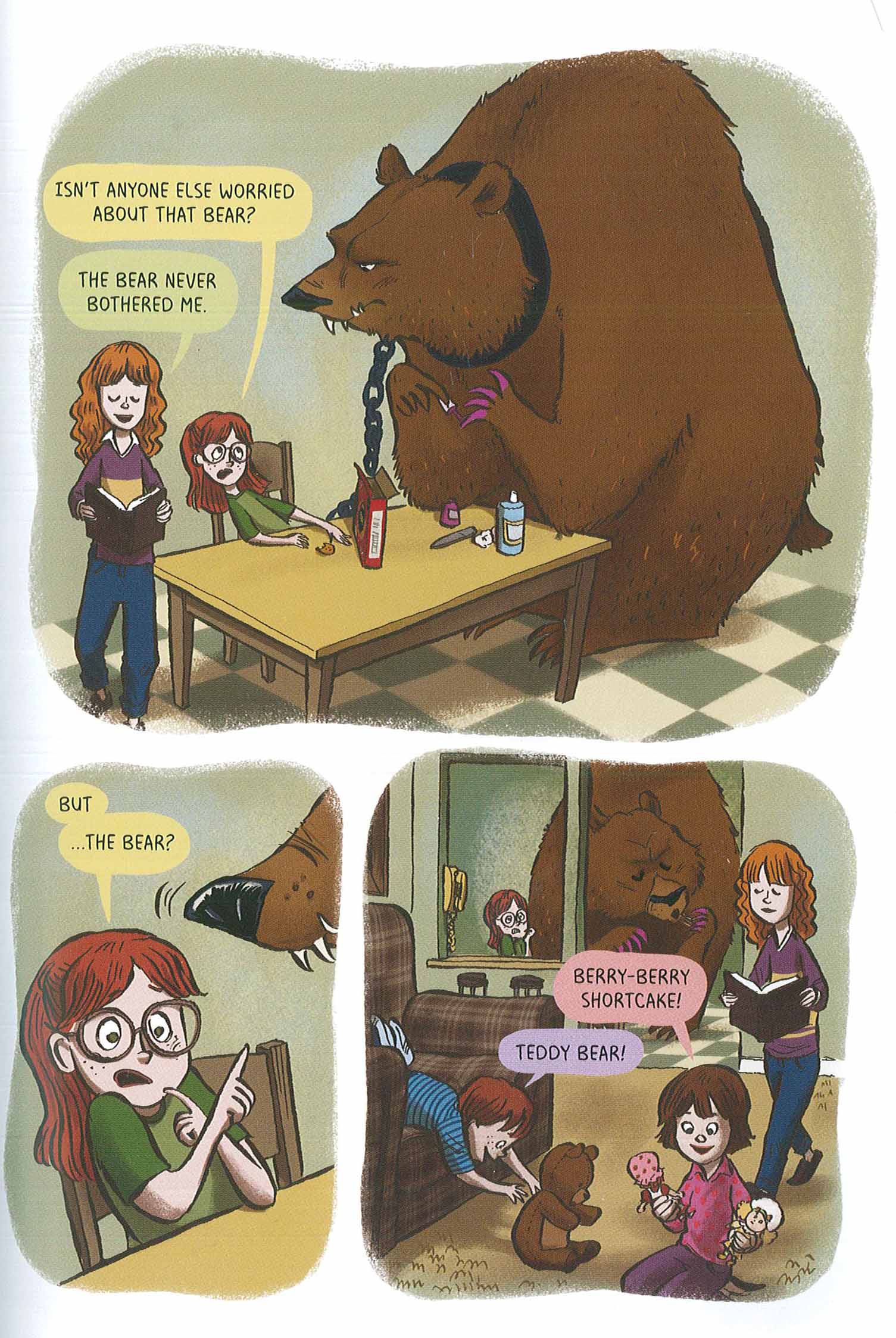 The visual metaphor of Shannon’s sister as the bear makes for brilliant details, like the giant teenage bear blowing on fresh fingernail polish above. Hale and Pham also manage to sneak in some powerful but not preachy lessons for kids, like Shannon’s eventual epiphany about Wendy—apparently Wendy was still being bullied herself: 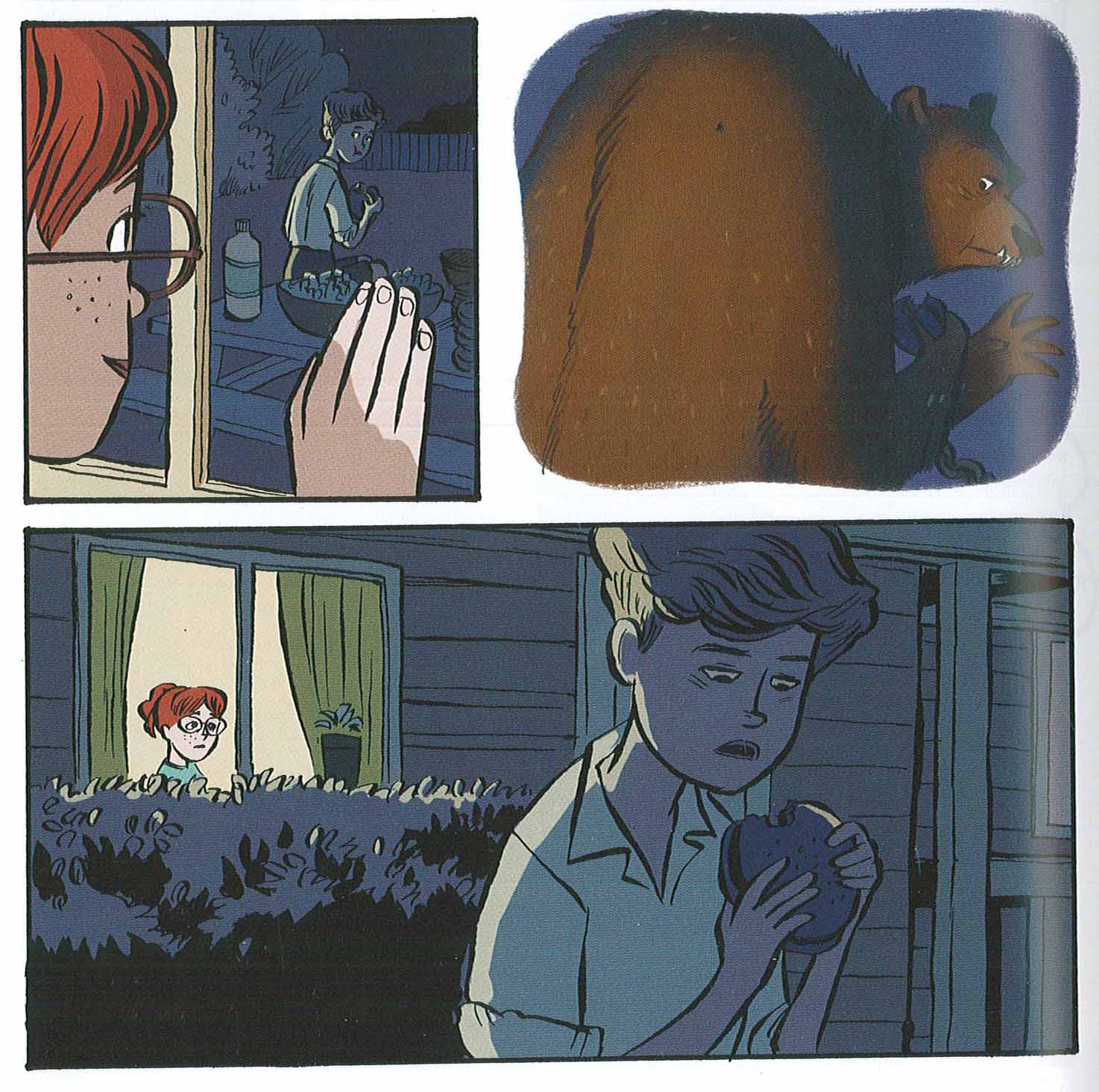 Most experts list this book as appropriate for ages 8 to 12, but my 5-year-old loved it too: even if he didn’t get all the nuances of the story, the bright, funny images carried him through. This is real-world stuff, however, so be ready to talk with your child as you read, especially if he or she is younger. One reviewer on Common Sense Media was appalled by what she saw a glossing-over of emotional and physical abuse in the book, as well as Shannon’s struggles with undiagnosed anxiety disorders. The same reviewer, however, was upset because she was trying to “shield” her child from these painful situations— in my opinion, a tempting but losing battle. Better to see a child overcoming those struggles than to pretend that they don’t exist. A parent knows best how sensitive their own child is, however, so here’s a heads up so you can make your own decision.

Since Hale is also a fierce advocate for gender equity, it’s also worth mentioning that although this book focuses on mean girls, both of my sons, five and eight, found plenty to relate to. “If we’re only giving kids stories about people like them,” Hale told an interviewer for “The Writer” in January, “we’re missing a huge opportunity to help them gain empathy, to understand and care about others. If boys don’t grow up learning empathy for 50 percent of the human race, how successful can we expect them to be in life?”

“Real Friends” is a great book for any kid, male or female (or any grownup, for that matter) who has ever worked through a rough patch with friends. Even as adults, we can still land where we just don’t fit in sometimes, which should serve as a good reminder of how much more devastating it is to be an outsider when you’re a kid. Hale admitted last year to Publisher’s Weekly just how difficult it was for her to write this book: “I’m a mature adult with a career and kids, so I should not be affected by what happened in fourth grade. Yet when I went back, I couldn’t help feeling that trapped, helpless feeling.”

Hale and Pham remind us all of the best strategies, especially imagination, for helping kids work through these rough patches. Even adults might benefit from imagining themselves as superheroes, just as Hale and Pham do at the end of the book, in lieu of bio photos:

Maybe we should all try this tactic out. Maybe we really can save the world from bullies, even the grown-up ones. Worth a try.